| Blog English | Dogmatism pushed Joram into the arms of islam

Dogmatism pushed Joram into the arms of islam


Recently there was considerable controversy in Holland about a (former) politician of an anti-islam party (PVV), Joram van Klaveren. He converted to islam. Subject of the discussion was: how could somebody who had the reputation of expressing anti-islam views, have defecteder to (what he called before) the enemy. Of course, it brought him scorn from his former political friends. And the mainstream media had, secretly, fun how the PVV (and it’s not the first time) ‘shot themselves in the foot’.

What intrigued me, were the motives Joram mentioned himself. But firstly I will say this. He grew up in a protestant, reformed context and studied religious sciences in Amsterdam. The day he started this study was, remarkably, 9/11/2001, the day of the attacks in America. That is more or less symbolic, for the conflict between the christian west and the islam which became leading for Joram’s political path. After a few disappointing experiences he decided to write a book about islam. But, exploring the matter, he, gradually, made a conversion. Listening to his story, I don’t hear an unstable attention-getter, rationally and pleasantly he explains how he has come to this.

Joram tells that he has not become muslim because of islam, but because of his theological doubts about christianity. Convinced of God’s existence, he got stuck in the christian dogmatism. Joram specifically mentions the doctrines of the trinity, the inherited sin, the divinity of Christ and the concept that God could only forgive by a substitutionary sacrifice. These dogmas pushed Joram in the arms of islam. In the interviews with him, I heard and read, I don’t recognize a convinced muslim, but more a dropped-out churchgoer who is determining that the islam has better answers to the mentioned issues than the church.

One God vs trinity

The issues mentioned by Joram, are exactly the ones where the church explicitly deviated explicitly from the Biblical testimony. The first dogma of the church history was immediately the biggest derailment: the doctrine of the trinity, which denies that there is “one God, the Father”.  The most important Biblical truth (!!) was changed into a doctrine that the one God consists of three persons. The truth of one God gives way to a complex and inwardly contradictory mystery. The doctrine doesn’t come from the Scripture and took shape not before the fourth century of our era. Both the formulation and the concept in itself are not derived from the Scripture. Both within Judaism and within islam this doctrine is denounced as disguised polytheism.

The doctrine of the debt inheritance and the inherited sin can be characterized in the same way. These aren’t Biblical terms as well. Paul says: through one man sin entered into the world, and through sin death, and thus “death passed through into all mankind” (Romans 5: 12). We are mortal, that is heritable. And that makes us sinners, i.e. missing the mark.

Another idea Joram cannot accept, is that Jesus had to die, carrying the punishment for our sins, so that God could forgive. Also, here the christian dogmatism alienated him from the Scripture. For the bible also doesn’t know this doctrine. Nowhere we read that God’s punishment or anger came over Jesus on the cross. Nowhere we read that he paid our debt to God. “He died for our sins”, yes indeed (1 Corinthians 15: 3)! But not undergoing God’s punishment, but saving us from our sins. A completely different perspective. The cross of Golgotha is not yet the sacrifice, it’s the slaughter that prefaces the sacrifice! The sacrifice itself is the resurrection from the death, after the slaughter.

It’s really sad to see how precisely the church is responsible for the alienation of its members. That a religion like islam is providing ‘better answers’ than the church. Who tells Joram the Biblical truth. Who makes clear to him that the answers of the Scripture easily wipe out all criticism and supplies an unsurpassed Good Message? For which religion tells us that the one GOD is the Saviour of all mankind? Unconditionally and for free?! Yes indeed, Saviour of muslims, buddhists, atheists and… even of all christians. 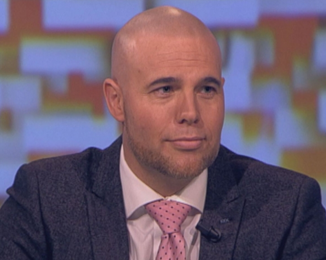