| Blog English | Did Abraham keep the law of Moses?

Did Abraham keep the law of Moses? 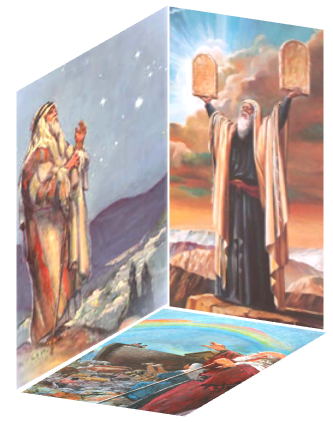 In Galatians 3 Paul argues that Abram was righteous by belief in God’s promise (Gal. 3:6). Naturally Abram did not live according to the law of Moses because it would still take centuries before that law would be given to Israel (Gal.3:17). The law “entered” after 2500 years of human history (Gal.3:19; Rom.5:20). With this ascertainment Paul indicates that the law of Moses was no universal rule of conduct for humanity. The law was given to ONE nation, two and a half thousand years after Adam (Rom.5:14) and four hundred and thirty years after the promise made to Abram. Preachers tried to make the ecclesias of Galatia believe that, in order to live righteously, they couldn’t do without the law of Moses. But if that would be true, how then could Abram be declared righteous, long before the birth of Moses?`

Commandments and Statutes BEFORE Mozes

Of course, God had given provisions and instructions to humanity before. This already started with Adam, the forefather of humanity. Thus the institution of marriage dates from that time (Mat.19:4,5; 1Cor.6:16). The one God had given his promise concerning the “seed of the woman” which would crush the “head of the snake” and he has depicted this in the sun, the moon and the stars (constellations), so of old, humanity could, both literally and figuratively walk in the light thereof (1:14; 3;15). Later God had given the rainbow as a sign of his covenant with Noah and his descendants, that is to say, the whole of humanity. This was accompanied by new instructions like the death penalty (Gen.9:6) and that man was allowed to eat meat, except the blood, from that time on (Gen.9:3,4). That is why, during the gathering of the apostles, it was agreed that the believers from the nations would abstain from idolatry, fornication and from blood (Acts.15:20, 29). This was not a partial enforcement of the law of Moses – it concerns universal instructions that apply for the whole of humanity since Adam!

What did Abraham abide by?

Because that Abraham obeyed my voice, and kept my charge, my commandments, my statutes, and my laws.

then it is preposterous to consider this the law of Moses. Drawing such a conclusion is called an anachronism –  which means giving an interpretation  to a concept which it could not have at that time. Abraham had listened to God and (like it is written) “kept my charge”.  When we zoom in on the Hebrew language being used here, we see that two words are being used that have the same root (SJ-M-R) which means keeping or guarding. So literally: Guarded my guard. God guards his word. For instance, God had sworn an oath to Abraham which He guards like no other. And Abraham guarded this guard –  in his heart. God had instructed Abraham about this (“my commandments – mitswah), ordinances (“my statutes”) and had given instructions (“my law” – torah). These concern specific instructions and directions that God had given to Abraham. Like he had given the people of Israel specific instructions and directions through Moses.

Discerning what it applies to

The bottom line is that we should read the Scriptures with distinction. Gods covenant with Noah had another character and scope than his covenant with Abraham. Which in turn is distinct from His covenant with Israel at mount Sinai. It concerns different events, different times, distinct addressing and instructions. Failing to appreciate this leads to the hopeless mix of law and grace about which Paul writes in his letter to the Galatians.