Creationism in trouble (2): the six days


In the previous blog I discussed the idea that Genesis 1 would teach that God created the world in six days.  For many an obvious thought and still….it is not written like that.

Words of creation in six days.

Usually the discussion about the days in Genesis 1 comes down to the question if these days should be considered as 6 x 24 hours or as six ages. Purely from the text itself there is in my opinion no reason to think of ages. Every time we read “And evening came to be and morning came to be: day X”. That is solid language. The big problem however with this 6 x 24 hour explanation is how there could be spoken of evenings and mornings when the sun was not created until the fourth day. Because, aren’t mornings and evenings the result of sunrise and sunset? However, if we consider the six days in Genesis 1 as the days in which the words of creation came to man, than this objection disappears at once. God did not make the sun on the fourth day, but on the fourth day He made man known  with it. The sun itself was there already much earlier.

When Genesis 1 is the six day revelation of the creation than that explains also why terms like ‘day’, ‘night’, ‘heaven’, ‘earth’ and ‘sea’ are described by God. “And God called the light day and the darkness night”, “And God called the dry land”, and so on. It is man who receives schooling. At the same time, that is also the explanation why nothing happened during the nights. That was not because God was sleeping, but because man, to whom He was addressing Himself, enjoyed a night’s rest.

As an objection to this explanation Exodus 20:11 is brought up where we read:

11 For in six days Yahweh dealt with (most translations have the verb made) the heavens and the earth, the sea and all that is in them… (CLV)

In the first place it has to be pointed out that the verb ‘create’ is not used here. But Also the word ‘made’ (not used here in the Concordant Literal Version but used in most translations) is not accurate. The Hebrew word to which it renders (Hebr. asah; Strong.6213) has the much broader meaning of ‘doing’ in Hebrew. With this verb it is also translated in the previous verses.

9 Six days shall you serve and -do all your work, 10 yet the seventh day is a sabbath to Yahweh your Elohim. You shall not do any work, you,  your son or your daughter, your manservant or your maidservant, your bull,  your donkey or your beast, or your sojourner who is within your gates. 11For in six days Yahweh dealt with (most translations have the verb made) the heavens and the earth, the sea and all that is in them…(CLV)

Three times the Hebrew word ‘asah’ is used in this passage. The first two times it is translated with ‘do’ and the last time with ‘made’ (in most translations).  If one would have been consistent, the last ‘asah’ would be translated with ‘do’. The verse then would read: In six days Yahweh did the heavens and the earth. Compare this with a teacher doing the Eighty Years’ War in one lesson. I.e. he deals with and discusses the Eighty Years’ War during one hour. Likewise God did the heavens and the earth, the sea and all that is in them, in six days. I.e. He entrusted man with His words of creation during six days. “the chronical records of the heavens and the earth” (Gen.2:4, LXX biblos genesioos) came about in six days.

How long did God take for creation?

It may be clear that with this explanation of the six days, in a whole new perspective is given on the creation. “In the beginning God created the heavens and the earth”. When this was and for how long the process of creation lasted is completely in the open. Genesis 1 makes no comments about this. Therefore, no believer has to fall of his chair and not at all from his faith, when it would appear that the process of creation took millions of years. In the next and last blog of this series more about the role of evil (suffering and death) during the process of creation. 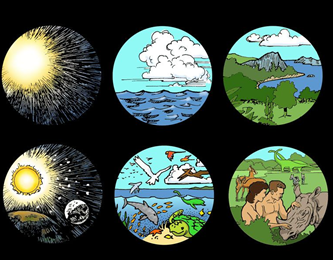