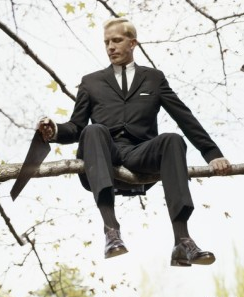 Creationism in the 70s

Creationism, i.e. the belief in the creation as described in the Bible, finds itself in heavy weather at the moment. I remember how in the 70s this movement was expeditiously and confidently on the offensive. ‘Adam or ape?’ was the defiant slogan. It was the time in which creationistic books appeared constantly and the Evangelische Omroep (a Dutch Evangelic broadcasting station) actively and openly promoted this way of thinking.

In the meantime, we moved on a generation and not much of the previous enthusiasm is left. Moreover, well known spokespersons of old have either embraced the evolution-mindset or declare to have become agnostic about the genesis of our reality i.e. they don’t know. But the first chapters of the Bible shouldn’t be considered as history. That’s the dominant idea. In this way, a well-known spokesperson within the Evangelische Omroep (a Dutch evangelic broadcasting station), Reinier Sonneveld, answers the question ‘Did Adam and Eve exist or not?’:

It could be, but probably no. (…) the Bible doesn’t deal about wether Adam or Eve existed or not. That is not the meaning of the text.

And to the question: ‘Was there a real fall into sin?’ Sonneveld answers:

The fall into sin probably has been a long process, in which hominids slowly became human and committed more and more errors. Animals cannot sin, humans can. When animals became humans, that was a fall into sin also.

Not everyone within these circles goes as far as Sonneveld, but this direction has been taken and the trend seems unstoppable. Within orthodox church communities preachers often don’t dare to openly admit, but many of them seem to have lost their faith in the historical trustworthiness off the Bible or are shy with it at least.

This doubt, about Genesis chapters 1 – 3, has a dramatic effect. Because if the Scriptures are not reliable with respect to the past, how could we trust them when it deals about the future? The average church-goer and especially the youth feels this much stronger than many theologians. If the story of Adam isn’t history, why should the story about “the Last Adam” be so? Paul wrote in 1 Corinthians 15 verse 22:

For even as in Adam, all are dying, thus also, in Christ, shall all be vivified.

But if the first writings are historically questionable or untrue, what reason do we have to believe the second? According to Paul, the Evangel relies on the historicity of Adam. And in general, it is undisputed that the writers of the New Testament presented Genesis 1 – 3 as being historical. As literally true.

A believer who abandons the literal meaning of Genesis 1 – 3 is like someone cutting the branch one is sitting on. But what is making Christians to do this? Their answer usually comes down to the incompatibility of Genesis 1 – 3 with scientific findings. The earth and the life on it are many times older than the, roughly, six thousand years of human history. And also that death didn’t come to earth, since the appearance of man.

Yet I absolutely do not feel the need to defend ‘science’. I know all too well that what today is asserted with certainty, is discounted and denied tomorrow. Not ‘science’ (or what passes for it) is the criterion for a believer but what Scripture says. Than it is obviously important to know what Scripture really says. And the we can distinguish that from what one thinks Scripture says. One thinks that Genesis 1 teaches that God created the world in six days. And one thinks, traditionally, that it was just since Genesis 3 (after the eating of the forbidden fruit) that death and corruptibility made their entrance into creation. But I dare to claim that Genesis 1 – 3 teaches neither the one nor the other and I also think I can make I plausible. That there are conflicts between what “is written” and the “wisdom of the world” doesn’t need to trouble us. On the contrary. That is how it is supposed to be and has never been any different. But it is troubling when the historical validity of Genesis 1 – 3 is discredited based on arguments that don’t do justice to the Bible. More about that in a next blog.