Could a human kill Jesus?


In a previous blog I explained that Christ was killed by a javelin thrust. John refers in chapter 19:34 to the obscured line of text in Matthew 27:49. It means that Jesus Christ was literally slain like the Passover: killed on the 14th of Nisan by bleeding. In fulfillment of the Scripture!

The question arises how such an important and clearly given information could be snowed under. The answer to this soon became clear to me from various reactions that reached me after the article was placed. For example, someone dismissively wrote:

He laid down His life … and no one else … not even the soldiers at the cross, says God’s word in John 10:

No human killed him, that is what the text wants to make clear…He laid down His Life voluntarily.

So the question is, are the words in John 10:17, 18 rightly a stumbling block to accept that Jesus Christ has been killed and slain by men? Below is a literal translation of the passage:

One important explanation beforehand with this translation: this is not about ’taking’, but ‘receiving’. Most translations say that Jesus had power to “take it again” but also that he said, “I received this commandment from my Father.” This is inconsistent, because in the root text the verb ‘lambano’ is used in both cases. Jesus did not take the commandment or prescription of his Father, but he received it. Well, Christ received life in the same way in the resurrection. He was raised from the dead by the glory of the Father (Rom.6:4; 4:24).

The idea that comes up in the common translations is that Jesus was God and therefore rose by his own power. But this is absolutely not according to the Scriptures. Christ was dead and GOD raised him up. If he had risen because he himself was God, he obviously did not need to be resurrected by another. In fact, he couldn’t even really die. And that idea plays in the background of the above question: God cannot die, and since Jesus is God, he cannot really have died. And so he couldn’t really be killed. The whole objection is therefore related to the (unbiblical and incomprehensible) teaching of the trinity, which states that Jesus was literally God and man in one person.

No one is taking it away from me.

Back to John 10. Does Jesus say in this section that he could not be killed? No, he does not say that. He says in the present tense: “No one is taking it (= my soul) away from me”. That is to say, at that time no one could harm him. Indeed, in the Gospel of John, we read of various attempts by the Jewish side to seize Jesus, but also that they were unable to do so.

These declarations He speaks in the treasury, teaching in the sanctuary, and no one arrests Him, for not as yet had come His hour.
-John 8:20-

No one could kill or even seize Jesus, as long as his hour had not yet come. And Jesus knew exactly when that specific hour came:

Now before the festival of the Passover, Jesus, being aware that His hour came that he may be proceeding out of this world to the Father…
-John 13:1-

Contrary to the above statement, Jesus was actually killed by humans. As he had previously announced.

Thenceforth begins Jesus to show His disciples that He must be coming away into Jerusalem and to be suffering much from the elders and chief priests and scribes, and to be killed, and the third day to be roused
–Matthew 16:21-

And later Peter and Stephen spoke about it in no uncertain terms in the same way.

This One, given up in the specific counsel and foreknowledge of God, you gibbeting by the hand of the lawless, assassinate
–Acts 2:23-

Yet the Inaugurator of Life you kill, Whom god rouses from among the dead, of which we are witnesses.
–Acts 3:15-

Which of the prophets do not your fathers persecute? And they kill those who announce before concerning the coming of the Just One, of Whom now you became the traitors and murderers
–Acts 7:52-

So yes, it was people who killed Jesus. Note: at the time determined by himself, by proxy. And it was then GOD who raised him from the dead! 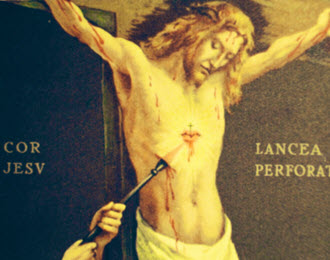