Summary of a speech, once given, in response to the naming of our both sons.

It’s well known that the name Boaz is connected to Naomi and Ruth. Far less known is that Boaz is not only a key player in the book Ruth, but also the name of of one of the two big columns in the temple of Solomon. The left column was called Boaz, the right column Jachin.

The first time the name Boaz is mentioned in the bible is in relation to the beginning of the barley harvest. The start of the barley harvest overlaps with a high day on Israel’s calendar: the day of the sheaf of the firstfruit. On this day Christ was resurrected from the dead…, as Firstfruit! The name Boaz means: in Him is power. Indeed: resurrection power.
Ruth 1: 21 and further; Leviticus 23: 9-15; 1 Corinthians 15: 22

Of Boaz is said that he was from Bethlehem. Bethlehem means: house of bread. David came from Bethlehem and of course the Son of David, the Living (barley) Bread.
Ruth 2: 4; John 6: 9, compare 6: 51

Boaz was a “wealthy man”. I.e. someone who is able to pay a high price. Boaz is a type of Him who paid the ransom for ALL. All mankind has been bought and paid and só it is the property of Christ. By the way, Boaz acts as redeemer in the book Ruth, that makes him a type of the great Redeemer.
Ruth 2: 1; 1 Timothy 2: 6

The history of the book Ruth refers prophetically to the fates of the Jewish people. Out of the diaspora it returns penniless to the land of the fathers (chapter 1). There it finds grace in the eyes of the Man of Bethlehem (chapter 2) and that leads to a meeting on the threshing floor (read: in Zion; chapter 3). In the end the Man of Bethlehem acts as a redeemer, so that the lost land still returns to the original family (chapter 4).
For the threshing floor as type of Zion, read Micha 4: 10-13; 2 Chronicles 3: 1

The name Jachin means “founder”. If one in the Bible is well known as founder, it’s God Himself. Many times is said that He established the foundations of the earth. Consider that in the Bible the earth is not a planet, but dry land on which we walk.
Zechariah 12: 1; Genesis 1: 10

God is the one who will establish Jerusalem and will constitute it as a praise in the earth. Until today the nations massively overestimate themselves about this city. There is the core of all problems of the Middle East. Until… there will sound: “blessed is He who is coming in the name of the Lord”. As from that moment the city will live up to its name: Fortress of peace!
Isaiah 62: 7; Zechariah 12: 3; Matthew 23: 39

Of the Messiah we read in Isaiah 9: 7 that He will sit on the throne of David. To the increase of the chieftainship and to the peace there will be no end in that Kingdom, for He will establish it. And, added to this, the zeal of the Lord will achieve this. The promised Kingdom will not come by human hands. And it also cannot be prevented by human hands.

Paul writes: “Now to Him Who is able to establish you in accord with my Evangel…” When in our days God ‘establishes’ a human, He does it in the Evangel preached by Paul. Nothing gives more grip and stability than the Message that was revealed to the gentile apostle.
Romans 16: 25

The two immense copper columns in Solomon’s temple, were actually styled pomegranate trees, with not less than four hundred fruits. Emblems of fertility, of generating new life. In the spring these trees are one of the first blossoming. Boaz and Jachin are jointly a monumental reference to the new Life (of the beginning of the barley harvest…)
1 Kings 7: 15-22; 2 Chronicles 3: 15-17

The same Solomon who put these copper pomegranate trees in the temple, also writes in the “Song of songs” that he’ll give his love, there where the (red!) grenades blossom. Also here the association of grenades with love and so with bringing forth new life. Grenades speak of the most high, i.e. Love and Life. The Hebrew word for ‘grenade’ (rimmon) means also ‘high’.
Song of songs 7: 12, 13

Boaz and Jachin literally and figuratively stand for the going into and going out of the sanctuary. The priest who went into or out of the house of God, passed these two columns. These columns are picture of Him who once went into the heavenly sanctuary and will go out in the near future. Boaz is the name of the left column and Jachin is the name of the right column. In the Bible left and right (as also in daily vocabulary) stand for respectively indignity and enhancement. Think about the well known goats at the left and sheep at the right. Left is the past tense of leave, right is just right. In politics ‘left’ refers to those who defend the marginalized.
Matthew 25: 33; Psalm 110: 1

The left column had been put in southerly direction, the right column in northerly direction. In the symbolism left and south are more or less synonyms. Like right and north are also. South and north stand respectively for indignity and enhancement. We say: down in the south and up in the north. And in the night sky we know the Southern Cross and the Northern Crown.
Compare 2 Chronicles 4: 10

The copper columns were moulded at the Jordan. More particularly at the place where the water once stopped streaming when the people of Israel went through (Saretan). Going through the Jordan (of death) is historically a symbol of death and resurrection and thus of the arise of new life. By the way, he passage through the Jordan took place, how could it be otherwise, at the beginning of the barley harvest!
1 Kings 7: 48; Joshua 3: 16; Joshua 5: 10-12 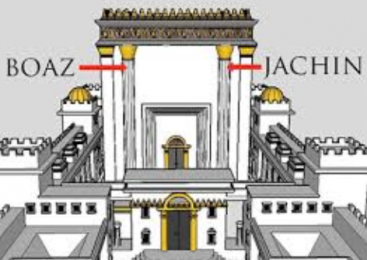