Long before Abram became Isaacs father, he was foretold that his seed (=offspring) would be strangers for 400 years in a land that was not theirs. Genesis 15:13,14

The He said to Abram: You shall know, yea know, that your seed shall become a sojourner in a land which is not theirs; and they will serve them, and these will do evil to them and humiliate them for four hundred years. But I will indeed adjudicate the nation which they shall serve, and afterward they shall come forth with a great many goods.

What is counted here is the time of sojourning of Abram’s seed until the Exodus. Abram himself was a stranger in the country, but his offspring would also be a stranger for four centuries. Only then would his offspring go to the promised land. Since Abram was 100 years old when Isaac was born, the Exodus would thus take place 500 years (100 + 400) after Abram’s birth.

We come across these 400 years in Exodus as well. Only the text (in most translations) seems to give a different interpretation to that period. Exodus 12:40,41

Most translations speak of 430 years, which is totally correct, but… the Hebrew text speaks of 30 years and 400 years. The 400 years of course refer to the prophecy to Abram. So 30 preceding years are taken into account here. I will come back to that later. The difficulty of the statement in Exodus 12:40 is that the text seems to say that the sons of Israel lived in Egypt for 430 years. This is the view in most translations. (NIV, KJV, RSV)

Yet this view is controversial for a very good reason. In the Septuagint (LXX), the ancient Greek translation of the Hebrew Bible, the 430 years do not only concern the stay in Egypt, but also with the stay in Canaan. The Septuagint reads:

The addition “and the land of Canaan” is not only found in the Greek translation but also in the Samaritan Pentateuch. That could indicate that these words have been lost in the Hebrew text. And that this is indeed the case, becomes clear when we include Paul’s letter to the Galatians. Galatians 3:17

Now this am I saying: a covenant, having been ratified before by God, the law, having come four hundred and thirty years afterward, does not invalidate, so as to nullify the promise.

Paul refers to the Greek translation of Exodus 12:40. According to Paul, the reception of the law ( in the year of the Exodus), took place, 430 years after the promise to Abraham. So Paul, without a doubt, assumed the Septuagint rendering of Ex. 12:40!

The 400 years in Exodus 12 and Galatians 3 speak of the time in which Abram’s descendants were strangers until the Exodus (Gen. 15:13). The 30 years that preceded it , start when Abram received the promise of God. That must have been when Abram was called in Ur of the Chaldeans. Since Abram was 100 years old at the birth of Isaac, he was 70 years old when he received the promise. Abram went on a journey to the promised land but remained stuck in Charan. Only after his father Terah died there, he departed to the land. About this Stephen said the following (Acts 7:4):

Then coming out of the land of the Chaldeans, he dwells in Charan, and thence, after the death of his father, He brings him into this land…

From Genesis 12:4 we know that Abram was 75 years old when he left Charan.

So Abram went just as Yahweh had told him; and Lot went with him. Abram was seventy-five years old when he went forth from Charan.

The conclusion must be that Abram was called and received the promise in Ur of the Chaldeans when he was 70 years old. Thirty years later Isaac was born and another 400 years later Israel left the land of Egypt. According to Ex. 12:40, this was not only accurate to year, but even to the day. So we know that when Israel left on the 15th of the month of Aviv (Pesach) this was also the anniversary of the promise to Abram. What a divine timing! 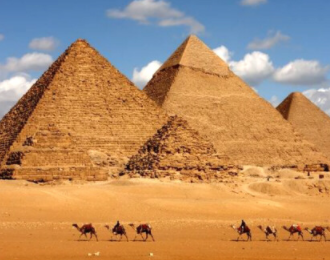