In November it was exactly 400 years ago that a synod took place in the Dutch city Dordrecht, abbreviated: Dordt. We speak about the year 1618. The direct reason was a disagreement between two professors from Leiden, Arminius and Gomarus. The subject was a doctrine. After Arminius passed away (1609) his followers drew up an objection (= remonstration) with five criticisms of the catechism of Heidelberg and the Dutch Creed. The tensions that only increased by this publication demanded an answer from the Dutch syno. This synod was gathered by the Dutch parliament, which shows that the conflict was also highly intertwined with politics. While the Eighty Years War with Spain was paused for twelve years (1609- 1621), the Netherlands were divided by internal tensions.

The synod rejected all five criticisms of the remonstrants unanimously and formulated this in five doctrines. Summarized:

In the Anglo-Saxon world these articles are known as ‘the five points of Calvinism’.

It’s not my intention to discuss all five articles here. The conflict was an internal Calvinistic issue. For a non-Calvinist like me it’s practically impossible to take position in that. For I believe in unconditional election and irresistible grace, but I resolutely reject the concept of limited atonement… So, what’s my position?

The concept of ‘eternity’ in the Canons of Dordt

The mentioned conflict could, in my opinion, only arise due to  a total lack of vision on the upcoming eons. Since the third and the fourth century theology replaced these eons with the concept of endless eternity. The term ‘eternity’ played a decisive role in the conflict between Arminius and Gomarus. Surely, it was about the character of election ‘from eternity’ and particularly about the destination of the human in ‘eternity’.

But, if Scripture doesn’t know ‘eternity’, but speaks about eons (= world eras), both parties were, as from the beginning, unavoidably, in the dark! The starting point was not right. The eon-ic destination is something completely different than the definitive destination of mankind. Christ must reign for the eons. Afterwards GOD will be ‘all in all’.

This lack of vision on the eons, hindered also the vision on the predestination. According to ‘Dordt’ a human is from eternity, either predestined, ór rejected. It’s under debate how to explain that ‘rejected’, but the division itself is undisputed. This concept leaves a totally distorted picture of what the Scripture says about predestination.

If GOD chooses, it’s never at the expense of the rest, but at the service of them. GOD chose Abram, not because He wasn’t interested in the rest of mankind, on the contrary! Abram was chosen, in order to bless through him all generations of the earth. To be predestined is not only a privilege, it’s particularly a task and a mission. Always in view of the other creations of GOD.

A sovereign God and yet darkness…

Undoubtedly, the synod of Dordt had the purpose to highlight GOD’s sovereign predestination. Without any human contribution. A human cannot contribute anything to his salvation. All boasting is excluded. ‘Dordt’ wanted to make a clear statement to Arminius and his disciples. And rightly so.

But without a view on GOD’s universal and unconditional love, the Canons of Dordt could not be anything other than  a pitch-black document. Without vision on the upcoming eons, there’s also no view to the progress of GOD’s ways that lead to an ‘all’s well that ends well’. The brethren of the Reformation know that GOD will never let go the work of his hands? Judgments and death are never the endpoint in the Scriptures. These notions are missing in the Canons of Dordt and thus they cause blindness for the truth of the Evangel, announced by Paul: “the living GOD who is the Saviour of all mankind, especially of believers!” 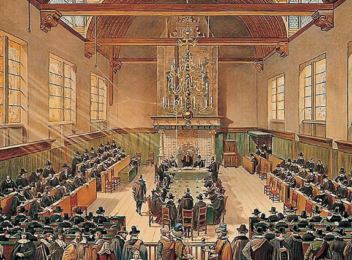