Next Saturday more than 250 churches will sound the ‘alarm bell’ for climate. A catastrophe endangers us. Then it makes sense that the clocks are sounded.

In the green colours of Greenpeace, banners with the text ‘we sound the alarm bell for the climate’ are fixed to dozens of church buildings. On Saturday, just before noon, everywhere in Holland church bells are sounding to, – like Greenpeace calls it – give a strong signal to the politicians who will go to Poland’. There the succeeding week the COP24 took place, the most important international climate summit since the conference of 2015 in Paris.

The big issue is: are the participating countries come able to come to an agreement to keep the global warming to less than one-and-a-halve degrees.

Greenpeace prepared a meticulous manual for participating churches. The target is “creating as much impact as possible”.  In the meantime, more than 250 churches have since announced to sound the bell, (…). Almost forty carillonneurs will play just before noon the eighty-year’s hit ‘The Final Countdown’. The manifestation has support of Green Churches, the Alliance of Climate and the Christian aid organisation ‘Tear Nederland’.

The fact that the churches, in general, have moved far away from the message they should preach, was obvious to me. But I never cease to be amazed. Around the year 2030 AD, in about twelve years , exactly two thousand years have been passed since Jesus Christ was resurrected from the dead and he ascended to heaven from the Mount of Olives. A striking milestone, because at that moment for the Lord two days have passed (2 Peter 3: 8). Isn’t it foretold in prophecy that He would come back “after two days… on the third day” to restore the Kingdom (Hosea 6: 1- 3)? And okay, if 2000 is a rounded-up number, even in that case it’s significant. It means that the scenario written in the last bible book ‘the Revelation’ is coming soon.

You know, ‘the Revelation’ is the book in which is described how, by God’s intervention, a third of the all earth and its vegetation will be burned up (8: 6) and how a third of all life in and on the sea will die (8: 8). And subsequently, how a third of the waters and the springs will be deadly polluted by a falling star (8: 10, 11)? In chapter 16 of the same book these events are repeated from another perspective.

But what do the churches nowadays? Do they put this message high on their agenda? No, they cry along with Greenpeace and do their utmost to keep the warming of the earth under one and a halve degrees. Isn’t it a chutzpah?

Be sure that there will be a Final Countdown – by GOD. Foretold by the prophets: GOD himself is going to warm the earth… and a lot more than one and a halve degrees. That is the message from God that sounds in the Scripture. Who takes the Scripture seriously, would testify of that. Not as a hopeless fate for which the worlds needs to be protected. On the contrary. These judgments must take place to establish GOD’s Kingdom, in and from “Jerusalem, the city of the great King”. For GOD’s judgments are always positive at the end – focussed on the salvation of all his creations. But the churches are very busy with the message of Greenpeace and expect benefits from human effort.

It will be a rude awakening for them. 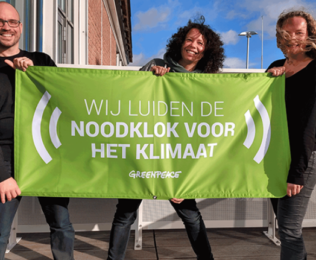