And he was seen by Cephas. Thereupon by the twelve.

“The Twelve” (but with only ten attendees) were together in the evening of a turbulent day. The heavy and sealed stone in front of the grave had been rolled away since the early morning. The grave was empty except for the swaddling and the rolled-up sweat cloth. The Roman guard in front of the grave was hired by the Jewish leaders to say that the disciples would have stolen Jesus’ body. Were they perhaps wanted and did they therefore close the doors? And then there were all kinds of reports that the living Jesus would have shown himself that day. Even to one of them, Peter. What should you think of all this?

And then suddenly Jesus is in their midst. A mixture of disbelief, dismay but also joy takes hold of them. And while Jesus tells them “shalom,” he shows them his pierced side, hands and feet. Now no more wounds, but scarring. Jesus invites them to touch him. And as additional evidence, he eats a piece of fried fish in front of their eyes.

And then he opens the scriptures for them to show he had to rise on the third day. How irrefutably convincing can something be ?! 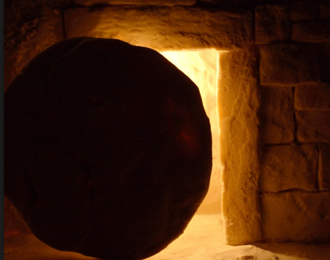