Everything in the Evangel revolves around the resurrected Christ (: 14). Christ’s resurrection is not a metaphor, but a concrete historical fact. His revival on the third day is just as historical as his dying and entombment.

The mention of Christ’s funeral and his stay in the grave until the third day accentuate his death. Given his extremely violent death on the cross, there could be no doubt about it anyway. Jesus’ corpse was then taken from the wood and wrapped in a shroud, prepared with spices. The body was then laid in a nearby newly-hewn grave in a court. The opening was provided with a heavy stone in front.

A day later, for fear of theft, the Sanhedrin managed to get Pilate to send a Roman guard of soldiers, to guard the grave. The stone in front of the tomb was also sealed. Nobody could enter the tomb. Nobody could leave the tomb. At least … humanly speaking. 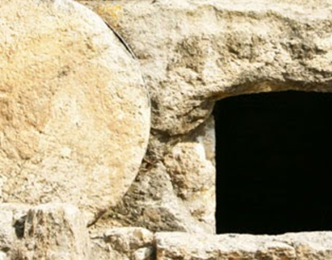