the timeline in a nutshell

In these studies and articles I point out that world history since Adam until now is almost 6000 years old. Divided into 3x 2000 years. From the creation of Adam (Anno Hominis, AH) to the birth of Abram is exactly 2000 years. That year was also the year of Noah’s death. Exactly 500 years later (in 2500 AH) we arrive at the Exodus from Egypt. And exactly 500 years later (so in 3000 AH) we arrive in the year that Solomon dedicates the temple. Another 500 years later (3500 AH) the temple in Jerusalem is being rebuilt with the cooperation of King Cyrus. That is also the year that the period of “the 70 weeks of years” as prophetically described in Daniel 9 begins. Again, that is also 70 cycles of Sabbath years (= 70 x 7 = 490 years + 10 jubilees), so again 500 years. And this term would end with the Messiah. So that the period from Abram to the Messiah falls into four periods of 500 years each. All these numbers and calculations are only derived from Biblical data, without support from secular chronology.

what year are we living in now?

With this knowledge as a basis, it is then not that difficult (but with some reservations) to determine in which year we currently live. The only thing needed for this is a link between Biblical chronology and our era. I assumed 30 AD as the year of Jesus’ death and resurrection. Another 3.5 years later (34 AD) Stephen would be stoned thereby completing the period of “the 70 weeks of years”. So that the year 34 AD corresponds to the year 4000 AH. That’s four millennia since Adam. Even without a calculator, we can then determine that the year 6000 AH should start in 2034 AD. Which means that 2019/2020 AD corresponds to 5986 AH. According to this calculation, there are (more than) 14 years to go before the seventh millennium starts.

The Jewish era only came into use during the Middle Ages, mainly due to the Jewish scholar Maimonides. This means that this year count is actually younger than the Christian year count that came into use in the sixth century on the basis of the calculations of Dionysius Exiguus. On the other hand, it must be said that the Jewish era is based on a rabbinic writing under the name Seder Olam Rabba, which dates from the second century AD.

The calculations in Seder Olam are based in part on Biblical data and in part on rabbinical traditions from those days. At no time span do the data completely match those of (which I call for convenience) the GB timeline. Sometimes Seder Olam calculates a period longer, such as the time up to the flood (+5 years) but usually of course shorter. Because the Jewish era as a whole is 206 years behind the GB timeline. For example, Seder Olam sets the year of the Exodus at 2448 AM, while the GB timeline amounts to exactly 2500 years. Incidentally, in a two and a half millennium period that is a difference of two percent. And over a period of six millennia, a deviation of two centuries is not much more than three percent.

It is all the more peculiar that an out-of-proportion difference comes to light when we look at the second temple period. That is the time from the rebuilding of the temple to its destruction by the Romans in 70 AD. So those are the centuries that preceded the emergence of the Seder Olam writing. Seder Olam only calculates 420 years for that period, which according to the GB timeline is no less than 116 years too short. By the way, according to the current academic chronology, that shortage is even greater. This time covers for a large part what is called “the intertestamentary period” which refers to the time between “the Old and the New Testament”. There are no historical books in the Bible that speak of that time.

A salient detail is that the Seder Olam writing originated at a time when the controversy between Hebrew Christians and traditional Judaism was still fresh. A major role in that controversy was played by the prophecy of “the seventy weeks of years” in Daniel 9. This prophecy begins to count from the rebuilding of Jerusalem and continues until the coming of the Messiah. Judaism could not get along with that prophecy because it leads to the first century of our era and therefore to Jesus Christ. The writing Seder Olam is attributed to Jose ben Halafta, the most prominent student of rabbi Akiva, who was the inspiration for the rebellion of Bar Kochba (135 AD). This leader was considered by Rabbi Akiva to be a possible Messiah. It was the data in Seder Olam that provided Bar Kochba with arguments for setting himself up as Messiah … However, in order to make “the seventy weeks of years” come true in the 2nd century, more than a century had to be ‘eliminated’ in the chronology …

This blog is not about supporting dates and milestones. For this I refer to the aforementioned studies. The only thing that matters to me now is how the GB timeline can deviate two centuries from the Jewish era.

To be clear: even the chronology that I present on the GoedBericht site is certainly not the end of all contradictions. In fact: I invite everyone to undermine it on the basis of Scripture (!!). Because only what can stand criticism is worth believing. In particular, the Biblical time frame is so beautifully arranged and displays such breathtaking symmetry and parallels that no one can escape the impression that this must be a matter of Divine guidance. Yes, the world times are also in GOD’s hand! 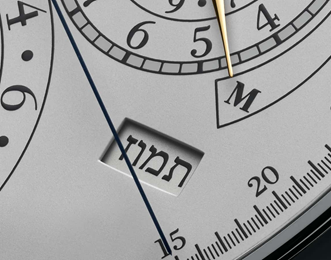