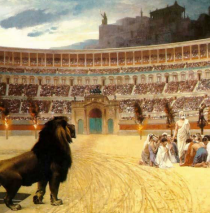 Our word “martyr” comes from the Greek word marturion, which even as the Latin martyrium, is means “testimony given by a testifier (=witness). A martyr would be a “witness”.  Oddly enough, however, the concept in many Western languages, has the meaning of a person who is put to death for his conviction. It typifies how the world engages with the truth. A witness is someone who speaks of what he has seen and heard, but because the truth in this evil eon (which is governed by the lie) is not accepted, he (often) perishes as a martyr. That is the fate of the witness. The concept “witness” is in a large measure also a legal issue. Witnesses are called to the court. From the Bible, we know the rule: “in the mouth of two or three witnesses shall every word be established” (Mat.18:16). It is in this capacity of witnessing, that the Apostles were appointed. They would bear witness to what they had seen. Already the first chapters of the book ‘Acts’ make this abundantly clear.

… and you shall be My witnesses both in Jerusalem and in entire Judea and Samaria, and as far as the limits of the earth.” -Acts 1:8-

Then, of the men coming together with us in all the time in which the Lord Jesus came in and out to us (…) of these one is to become a witness of His resurrection, together with us.” -Acts 1:21,22-

This Jesus God raises, of Whom we all are witnesses. -Acts 2:32-

Yet the Inaugurator of Life you kill, Whom God rouses from among the dead, of which we are witnesses. -Acts 3:15-

And with great power the apostles rendered testimony to the resurrection of Jesus Christ, the Lord… -Acts 4:33-

When someone dies for another, his love is beyond all contradiction (John 15:13; Rom.5:7.8). This willingness to die is also the undisputed evidence of a reliable witness. Is a witness willing to die, then we must assume that his testimony is manifestly true. And that is exactly unto which all the apostles (1Cor.4:9) appeared to be ready to accept, cheerfully. Most of them (if not all), indeed, died as a martyr. Is there any better evidence for their reliability than that? Indeed, sometimes people die for a lie, but no man dies for something of which he knows that it is a lie. The following three facts, in the NT, are undisputed, i.e. friend and foe agree about them. FACT # 1 The tomb where Jesus had lain was empty. FACT # 2 The apostles (and hundreds of others) unanimously stated that they, in the forty days after his resurrection, had seen Jesus many times, with their own eyes. FACT # 3 All the apostles (and many others with them) were unreservedly willing to die for their testimony. It are these facts, among others, which make ‘the New Testament’ incomparable with whatever religious or philosophical book, considered. It concerns “no cunningly devised fables” (2Pet.1:16), but evidence gathered by witnesses. Documented history. That is the solid bedrock on which our faith in the risen Son of David is based!