Why the devil is "God’s devil". 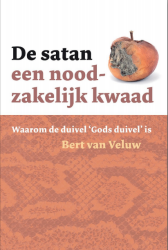 Recently, a book was published under the title, “Satan, a necessary evil”, with a subtitle, “Why the devil is God’s devil.” The book is written by Bert van Veluw. I have not read the book, itself, except some reviews and also listened to a few interviews with the writer. Van Veluw denies that the Devil (derived from diabolos = one who mixes things up) is a mythological figure. But he especially contends the common, orthodox idea that the Devil is a fallen angel. In an interview, he said about that last idea:

For that, I find no convincing data in Scripture.

I am glad to hear this expressed from this corner, for a change. For indeed, the biblical arguments that are put forward in defense of Satan’s downfall in the past, are razor thin. Passages from Isaiah 14 and Ezekiel 28, are presented, but both of these Scripture passages are, respectively, about the King of Babylon, and the Prince of Tyre. Or about “a man and not a god,” as Ezekiel 28:9 says.

Today (30-10-2012), in the Dutch newspaper (Nederlands Dagblad), was published an article submitted in response to Veluw’s denial that Satan is a fallen angel. The sender’s only argument against it is that the Book of Revelation speaks of a fall of Satan.

And the great dragon was cast out, the ancient serpent called Adversary and Satan… Revelation 12:9 (CLV)

Indeed, here is, unmistakably, mention made of Satan’s fall… but it will be a fall in the future. However, please note: Satan will not fall from heaven on his own initiative – he will be thrown out. The context of Revelation 12 makes it clear that when Satan and his minions will have been thrown down to the earth, they will persecute “the woman” in the wilderness (12:13). This is about the infamous period of “the great tribulation” (1260 days, 42 months, 3.5 years) in which believing Israelites will find a hiding-place in the wilderness (Rev.12:6). However that may be, the depicted fall of Satan is not about a fall in the past, but about Satan being cast down to the earth, which precedes “the great tribulation”.

The devil besides God?

Returning to the aforementioned book, the author cannot rhyme the traditionally assigned place of the devil with what the Scripture says. In an interview he stated:

It is extremely difficult to give a place to the person of the devil in a monotheistic religion, like Christianity. There can be no one besides God.

AMEN!, as what concerns the latter! However, Christianity is not as monotheistic as it claims to be. This is evident, not only from the doctrine of the Trinity, but also from the honor that is (unconsciously) given to the devil. If the devil would be able to thwart God’s plans, he is more powerful than God. This is an absurd idea! Listen to God’s own words:

Evil does not exist of and by itself (if so, it would be the Godhead), but even as light and darkness, it is created. “The old serpent” fulfills a function as a devil (as one who mixes things up) and Satan (= adversary). He is a servant of God.

Once Satan’s function will be fulfilled, GOD will put an end to him as adversary, by casting him into “the lake of fire” (Rev.20:10), where he will undergo a long and painful process. Why? To experience the truth of Jesus ‘ words:

Then Jesus is saying to him, Go away, Satan, for it is written, THE LORD YOUR GOD SHALL YOU BE WORSHIPING, And to Him only shall you be offering divine service.” Matthew 4:10

This was not only said to Satan, but also about Satan: he shall worship God! Then, he obviously will not be a Satan or devil, anymore. Celestials and terrestrials and subterraneans, in short, ALL will be acclaiming that Jesus is Lord, to the glory of God the Father! (Phil.2:10,11). Indeed, the devil is God’s devil. An instrument in God’s hand. No less and no more.