| Blog English | Who is my neighbour?

Who is my neighbour? 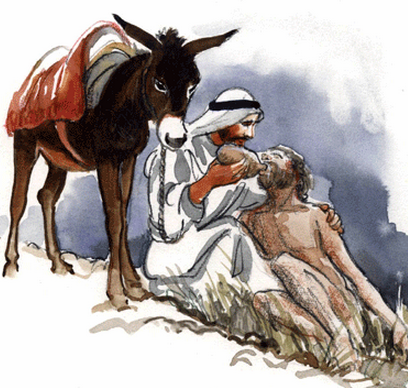 The parable of the good Samaritan (Luke 10:25-37) is undoubtedly one of the best known passages in the Bible. It is thought to be given as an incentive to actually love our fellow man. Who could have any objections to this? But is that the thrust of this parable? Let us follow the logical line of the text. A lawyer came to Jesus to try Him and asked the question: what must I do to inherit eonian life. After which Jesus asks him a question, in return: what is written in the law? And the man responds: love God above all and your neighbour as yourself. And Jesus confirms that answer. But because the lawyer wanted to justify himself, he continued with aother question: who is my neighbor? And then Jesus replies with a story about a man who descends from Jerusalem to Jericho and ends up in the hands of robbers who leave him, half dead, on the side of the road. A priest and a Levite also came down on that road, but the man did not get any help from them. But finally, it is a Samaritan who sees the man and takes compassion on him. He looks after him and takes him to an Inn, paying all the expenses for him. And then the narration takes a noteworthy turn. For Jesus does not ask: who was the neighbor of the Samaritan? No, He asks:

which of these three do you think was neighbor to him who fell among the thieves?”

Please note that the previous question was: who is my neighbor whom I must love? And now, the lawyer himself may provide the answer:

He who showed mercy on him.

This lawyer wanted to justify himself. He probably thought to inherit eonian life by being merciful to others. But by reversing the question, Jesus made it clear that this lawyer was like unto the man who was half dead, lying along the side of the road, totally dependent on the Neighbor Who would show him mercy. That is the surprising message of this parable! Jesus concludes with: go, and do thou likewise. I.e., love this Neighbor and inherit eonian life.