Was Jesus left by God?


For most believers the above mentioned is barely a question. Surely, didn’t Jesus cry on the cross: “My God! My God! Why didst Thou forsake me?” (Matthew 27: 46; Mark 15: 34). Indeed, that is approximately how it is rendered in most Bible translations. But if we look closer, we discover more…

why or to what?

In the first place the Hebrew word ‘lama’ doesn’t mean ‘why’ but literally ‘to what’.  ‘Why’ has a sound of despair, in the exclamation ‘to what’ is hope. Jesus did look forward continuously and therefore he could endure the cross.

forsaken or left to?

If we zoom in to the Greek word, Matthew and Mark used for ‘forsake’ (Strong 1459), then we see (in the Young’s Literal Translation!!) the same word, among others, also in the following Bible verses:

If we maintain this meaning of ‘leave to’, then Jesus didn’t ask:

“My God! My God! Why didst Thou forsake me?”

but his exclamation was:

Of course, Jesus knew the answer. Surely, it was for the joy lying before Him (Hebrews 12: 2). Therefore, Jesus’ question is rhetorical and an exclamation of emotion (compare Mark 8: 12).

the Father is with me

Jesus, on the cross, didn’t cry to a dark void, but in the consciousness that His God and Father was with him and listened. A few hours earlier Jesus had yet said to his disciples:

Left to his enemies

God didn’t leave His Son when he was on the cross, but He left him to his enemies. Paul wrote:

Surely, He Who spares not His own Son, but gives Him up for us all, how shall He not, together with Him, also, be graciously granting us all?
Romans 8:32

God gave His Son up to a world that was hostile. What was unknown for the world, is that God would, just in this way, give Life to that same world. The Life that God brought to life when Jesus, as First fruit, rose from death!

It is as happened once with Joseph. Indeed, because his brothers sold him, he could be their saviour (Genesis 45: 7). Thus, Josef was not only able to keep his brothers alive, but álso he captured their hearts. How could they stay hostile to their brother, who, despite of what they did to him, now satisfied their hunger and gave them bread (compare Romans 12: 20). Never love (Greek: agape) is proven more convincingly than against the background of hostility.

the cross as ‘lightning rod’

The background of the idea that Jesus should be left by God, is the ancient theology of ‘reconciliation by satisfaction’. This theology implies that God showed his anger, to Jesus instead of us. The world deserved punishment and Jesus brought the world in safety, as a ‘lightning rod’. According to this doctrine the cross was necessary, in the first place, for giving God the opportunity to show his anger.

Much to the contrary, the Scripture never speaks about God’s anger in relation to the cross of Golgotha. God doesn’t need to be paid, before He can remit. Indeed, remitting would be meaningless, if the debt had already been paid!

The doctrine of ‘reconciliation by satisfaction’ has made the people blind for the true sense of the cross. That ‘the cross reconciliates’ would mean that God received compensation and that He, therefore, would be able to forgive the sins of people, is such a caricature! Reconciliation means: making enemies to friends!

… and through Him to reconcile all to Him (making peace through the blood of His cross), through Him, whether those on the earth or those in the heavens. And you, being once estranged and enemies in comprehension, by wicked acts, yet now He reconciles…
Colossians 1: 20, 21

Reconciliation didn’t occur ON the cross, but occurs THROUGH the cross. God doesn’t reconciliate Himself to the world, but He reconciliates all to Him (Romans 5: 10; 2 Corinthians 5: 19)! Reconciliation occurs that moment that a creation is convinced by God’s love, proven on the cross of Golgotha.

The idea that Jesus was left by God on the cross, doesn’t only distort reconciliation – it changes reconciliation into the opposite. It makes the cross to a symbol of reckoning of sins. While, according to the Scripture, the cross is the emblem of not reckoning sins (2 Corinthians 5: 19). God didn’t leave His Son because He had an account to settle, He left him to enemies for He wanted to commend His love to us (Romans 5: 8)! 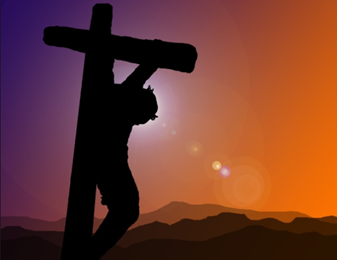