| Blog English | the unveiling of the image

the unveiling of the image 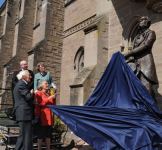 The highlight in the creation account of Genesis 1 is the creation of man “in God’s image.” The question of who or what that image is, remains unanswered in Genesis 1. It is the apostle Paul, who changes this question mark into an exclamation mark.

… the evangel of the glory of Christ, Who is the Image of the invisible God…2Corinthians 4:4.

… the Son of His love … Who is the Image of the invisible God, Firstborn of every creature, for in Him is all created … Colossians 1:13-16