| Blog English | The secret of the seven thunders

The secret of the seven thunders


In the book “the Revelation” a series of seven seals is followed by a series of seven trumpets. The opening of the sixth seal (= eclipse of sun and moon) coincides with the end of Israel’s tribulation and the appearance of the Messiah on the Mount of Olives. After which, at the opening of the seventh seal, the people of Israel are gathered together as a great crowd from all nations and a selection of 144,000 young men from them (Rev. 7). They are sent out to spread the message of the Kingdom of the world with the assurance that none of the plagues will affect them which will strike the world during the seven trumpets. The seven trumpets herald the year of Jubilee (compare Lev.25: 9), that is the start of the (seventh) Millennium.

In Revelation 10, six trumpets have now been passed. The vision of “the tiny open scroll” is the introduction to the climax: the seventh trumpet. For on that occasion the Kingdom of God will be established definitively over all nations. The scroll in Revelation 5 and 6 is the deed of ownership of the land of Israel and the opening of the seven seals is the actual transfer of the redeemed land. But with “the opened scroll” in Revelation 10, the scope is the whole world. That is why the angel holding the scroll is standing with one foot on the earth and the other on the sea. He has ‘occupied’ the entire world (read: liberated). And then it says in verse 3;

And he cries with a loud voice, even as a lion is bellowing. And when he cries, the seven thunders speak with their own voices.

The “loud voice” subtly refers to “the lion of Judah” who is about to expand his kingship worldwide from Zion (compare Joel 3:16). With “the loud voice” at the same time “the seven thunders” sound with an explicit message. After all, they “speak”. And John also notices what they say, because verse 4 continues:

Is that not strange? In the book “the Revelation” (= unveilling!) John must keep silent about what is being said. The content therefore remains hidden or secret. In the course of time there have been many self-proclaimed prophets who have thought they should fill this “gap” (Wiliam Branham, Rev. Leenhouts, et al.). They claimed that they had been told what John heard in the seven thunders. Would it? Or would Scripture be its own interpreter here too? In verse 7 John continues:

But in the days of the seventh messenger’s voice, whenever he may be about to be trumpeting, the secret of God is consummated also…

the disclosure of the secret

What would John mean by “the secret of God”? On what other than what has just been sealed and should not be recorded ?! The context makes it clear. The definite article (“the secret” or “the mystery”) also assumes that the reader is supposed to know what the secret is about.

John is assured that “the secret” would be “consummated” with the seventh trumpet. “Consummated” indicates that the secret had been mentioned before, but not yet fully. Logical, because it had to be sealed and withheld. Once the secret is complete, it is no longer a secret but is revealed. Does this mean that there is nothing more to say about this secret, as quite a few interpreters have concluded? In my opinion not, because once arrived in Revelation 11, John describes the blowing of the seventh trumpet and notes the following (11:15):

And the seventh messenger trumpets. And loud voices occurred in heaven, saying, “The kingdom of this world became our Lord’s and His Christ’s, and He shall be reigning for the eons of the eons! Amen!

Note: the seventh trumpet sounds but also great voices sound in heaven. Isn’t that exactly what we could have expected? What the voices of the seven thunders had to say was still a secret so far. But a secret that would be finished in the days of the seventh trumpet. And now the seventh trumpet is being blown and guess what? Great voices sound in heaven! It is the thunder that John heard earlier but whose message he was not yet allowed to make known because this would be premature. Now that the seventh trumpet has been blown, it is no longer a secret and so John also reports what they say. It is the statement that the kingdom of the world has become the property of Jesus Christ. From now on he will be king for the eons of the eons! What would still be premature in Chapter 10 to report (and therefore had to remain hidden) can now be declared openly! 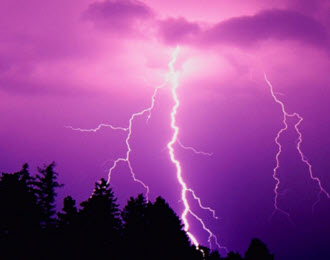