Students from Eindhoven pay with a subcutaneous chip

No more paying with your debit card, but with a chip in your hand. This is done in an experiment in which six students and a teacher from the Fontys Hogeschool in Eindhoven participate. More than two months ago they got a chip installed.

The 24-year-old IJsbrand Geutjes has a rod of 12 millimeters long under his skin. He can pay with it and open his locker at school. “I often left my wallet in the pocket of my jacket. That is no longer possible. I can’t leave my hand ”, he tells Omroep Brabant.

IJsbrand helps along with the other students to further develop the chip. They ensure that more is possible with it. 21-year-old Sam Mensink also wants to be able to use it to log into social media in the future. “For example, if you have forgotten your Facebook password, we want you to put your hand on a scanner and log in that way,” he says.

We are still considering the security of the chip and privacy. “For me, the limit is constantly being watched. That people can see where you are at any time of the day, “says Sam. “Now that is not possible, because the chip only works if you hold it near a device.”

According to Sam, everyone will be wearing a chip in fifteen years. “You don’t feel it. I think it’s funny to be the first one here. Now you are one of the few, but later we say: “Oh, you have it too.”

The ease of this development is easy to guess. A subcutaneous chip makes it unnecessary to carry cards and remember passwords and login codes. The development of this technology is inevitable and, as Sam says in the above story: in fifteen years everyone will be walking around with such a chip. I personally suspect that this is even a conservative prognosis. With the note that the surgical application of a chip may not even be necessary anymore, but will make way for even more advanced technology.

This development is of course immediately reminiscent of what is described in the conclusion of Revelation 13. There is talk of “the Beast from the land” who will claim a religious worship for “the Beast from the sea”. I believe (without explaining this further here) that this is about “the false prophet” who will set up a statue in Jerusalem for the leader of the ten-state union, a confederation of ten countries in the Middle East. The establishment of that statue on the temple square is called elsewhere “the abomination of desolation” (Mat.24: 15) and this will be the introduction to “the great affliction” for Israel (Mat.24: 21). Because everyone in the country (Israel) will be forced to participate in this religious worship. Whoever does not participate in this will not get a mark on the right hand or forehead, and is therefore excluded from the economy: one cannot buy or sell.

The scenario which John paints is very easily conceivable in the light of the aforementioned technological development. It is perhaps only a few years away from us that we will indeed buy and sell by using a mark on the body. The hand is (literally) the most obvious for this, but the eyes are also by means of an iris scan very suitable for authorization. This biometrics technique is already being used in many places, such as airports.

The word ‘forehead’ in the translation of Revelation 13 is doubtful, by the way. The Greek word ‘metopon’ only appears in ‘Revelation’ and is made up of the preposition ‘meta’ (= with) and ‘opon’ which means ‘sight’. The latter word is directly related to our word ‘optics’ (sight). The word “metopon” refers not so much to the forehead but to the strip below it: the eyes that serve for vision. With that in mind, the scenario comes even closer because the mark is then linked to the hand and the eyes.

In the meantime, we see developments moving at a rapid pace and it is hard for us not to notice that the Biblical term of “the two days” (read: two millennia) is expiring. Enough reason to be very alert and above all to look forward to the future promised to us 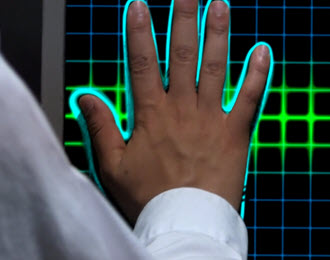