| Blog English | ‘the only hope’ of Hawking

‘the only hope’ of Hawking


The famous scientist Stephen Hawking gives humanity on earth to have about a thousand years. The news article reports the following:

“I don’t think we will survive another 1,000 years without escaping beyond our fragile planet,” Hawking said Tuesday during a talk at Britain’s Oxford University Union.

In January, during a lecture series at London’s Royal Institution, Hawking warned that developments in technology will lead to global cataclysm. He listed “nuclear war, catastrophic global warming, and genetically engineered viruses” as looming threats to our survival.

Hawking says our only solution is to find another planet to inhabit — an idea that NASA has been working on since 2009. The 74-year-old professor ended his speech by encouraging university students to “stay curious” and reminding them to “look up to the stars and not down at your feet.”

When I read the headline above the article, my first thought was that Hawking took note of the Biblical prophecy. Because based on that we know that after the current wicked eon the Millennium will commence. These are the thousand years in which the diabolos will be bound and rendered unable to seduce the nations. Subsequently the heavens and the earth will disappear in order to make place for the new heavens and the new earth. In this sense Hawking’s prognosis of about a thousand years comes close to the prophecy.

But about here is where the similarity between Hawking and the prophecy ends. Because the limit of a thousand years in the Scriptures is completely separated from human technology, nuclear threat and climate change. The solution for humanity is not to aim for the heavens. On the contrary. With this thought humanity derailed in Babel when they intended to build a tower of which the top would reach the heavens. Babylonian is since then opposed to Biblical. Not humanity will climb up to heaven, but the hope is in the fact that heaven will come to earth. Only a Divine intervention in world affairs will keep mankind for the impending calamity.

We are looking up like Hawking, that’s for sure! But not by putting our hopes in human ingenuity and ability. Our only hope and expectation is not to find another planet, but Gods assurance of a new world of which He Himself is “the Designer and Builder”. 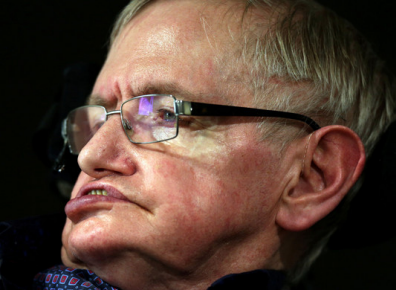