| Blog English | the lake of fire

the lake of fire 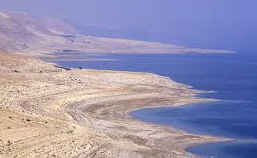 About fifteen years ago, my attention was drawn to an article, by the late Dr. Ernest L. Martin. Its title was, The Lake of Fire, Where Is it Located? It was very intriguing what he had to say about this topic! In the first place, Martin points out that the word behind “lake” refers to a realistic lake, as e.g., the lake of Gennesaret. The Bible uses the same word (Gr. limne) for lake. Secondly, he shows that this lake contains sulfur as fuel, a fact that involuntarily reminds one of the region of the Dead Sea. For it was in that area that God, about four thousand years ago, rained fire and brimstone on Sodom, Gomorrah and on the surrounding towns. The Dead Sea, today, is getting smaller in size, because of the falling water level and will, in the near future, again become a fiery area. Martin shows that in the days of the second coming, this lake and its surroundings (the region of Edom) again will play a major role in God’s judgments. There, God will properly deal with the gathered nations and their leaders (“the beast and the false prophet”). In the subsequent Messianic kingdom (the “thousand years”), this area will miraculously be restored, and there will even be a lake, rich in fish, with some fishing villages on its shores. However, at the end of this Millennium, the diabolos (=the devil) will again be unleashed and succeed to lead the nations in rebellion against Jerusalem. But, there and then, God will make short shrift with all of them. For the third and last time, this area will turn into a fiery furnace. Then, at the great white throne, where the dead have risen, those, whose names are not in the book of life, will be thrown into that lake of fire. Once again, they will die. Hence: “the second death.” That is obviously not the end, because death never has the last word with God. But that is an aside, for now. What Dr. Martin shows is that the Bible also here, speaks very concretely. As the Bible knows no “hell” but a Gehenna, an identifiable valley near Jerusalem, so also “the lake of fire” is not a vague abstraction, but a concrete, geographical location, which traditionally, has been associated with death. The English-language article of 1981 has recently been edited by David Sielaff (ASK) and has, not overly long ago, been excellently translated into Dutch by Anke Pronk Waterlander. Obviously, the information presented is the responsibility of the author, but I fully support the general thrust of it and can unreservedly recommend it for reading! Here is the link to the article: WHERE IS THE LAKE OF FIRE? &nbsp; ——————————— translation: Peter Feddema