The distance Mount of Olives – Jerusalem

Jesus ascended into Heaven from the Mount of Olives, adjoining Jerusalem on the east. It’s the same mountain where His feet will stand when He will return to Jerusalem to establish his throne (Zechariah 14: 4). I.e. to restore the kingdom to David (Acts 1: 6). In his report in the book of Acts Lucas mentions the distance between the Mount of Olives, where Jesus left them, and the city of Jerusalem, where they would wait for the fulfilment of the promise.

Then they return into Jerusalem from the mount called Olivet, which is near Jerusalem a Sabbath’s journey. -Acts 1: 12-

Nowhere in the Bible is mentioned explicitly the distance of a Sabbath’s journey. It is assumed to be known. Jewish tradition is indeed unambiguous in the answer: a Sabbath’s journey is a distance of 2,000 cubits, i.e. approximately 0,57 miles. This is fascinating. Because this distance is also mentioned when the people of Israel went through the Jordan to enter the promised land. Joshua instructed that first the Ark of the covenant would reach the Jordan and that the people would follow the Ark. At a distance of 2,000 cubits. Then we read that when the priests who carried the ark, touched the waters of the Jordan and a path was created so that the people could cross over the Jordan dry-shod. From the city Adam, somewhere far away, the Jordan became drained (Joshua 3: 16)

Israel follows her Messiah at a distance

This history of the cross over through the Jordan is a brilliant illustration of how Christ (symbolized in the Ark of the covenant) is paving a way through death. Death is (as so often) depicted by  the Jordan. For all since Adam a way is created, through death! And yes, the people of Israel shall follow her Messiah… albeit at a distance. It may be true that Israel, until today, is hostile to the evangel of the resurrected Messiah, the promise is, nevertheless, that they shall follow Him. Hosea 6: 1-3 says  that the people of Israel “after two days” and “on the third day” will be made alive and raised up. And then the Lord shall come to them. According to Peter these days indicate millennia: 2,000 years (2 Peter 3: 8)

The distance between the Ark (=Christ) and the people of Israel at the cross over through the Jordan, is the same distance as between the Mount of olives and Jerusalem. Isn’t that wonderful?! The Mount of Olives is the mountain where the Lord left the earthly scene and Jerusalem is the city of the great King. How long both salvation-facts are separated from each other? How long will it be before He, who went from our eyes, shall establish his throne in Jerusalem? When Israel shall finally enter the Promised Land? The Sabbath’s journey between the Mount of Olives and Jerusalem provides us, in secret, the answer! What a great expectation, while we can conclude that the period of 2,000 years is coming to an end, to focus our eyes on Him who is coming soon! 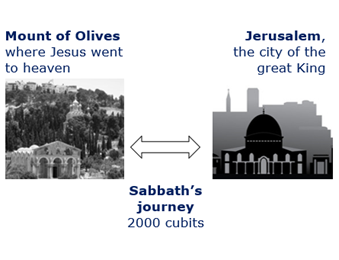