Previously we determined, that the restoration of Israel and with that also the return of the LORD to his people, would occur “after two days” , “on the third day” according to the prophet Hosea. Thereby realizing that which to man is a millennium, to the Lord is as one day (2 Pet.3:8, compare to Ps. 90:4). We are not to be oblivious to this, according to Peter. The two days in this context are the two thousand years in which Israel finds itself in the grave of the nations while the LORD conceals his face to them.

Much older and more famous however is the idea that the coming of the Messiah and the establishment of His kingdom will take place “after six days” and therefore coincides with the “seventh day” the Sabbath. In this case not counted from the first century of our common era but from the beginning of mankind. Even in the Talmud, which originated long before our era, this view is put forward according to the Encyclopedia Brittanica:

The vision put forward the most frequently… is that the Messianic kingdom will last for a thousand years… the world will labor and toil six thousand years; the millennial Sabbath rest will come for the people of God in the kingdom of the Messiah.

In Matthew 17, the history of the transfiguration on the mountain is described. A charged prophetic event because, according to Jesus Himself, it points towards the coming of the Ben Adam in his Kingdom (Matt. 16:28) when the Messiah will be seen in His glory. Peter confirms this in his second letter when he states:

16 For not by -following wisely made myths do we make known to you the power and presence of our  Lord, Jesus Christ, but by becoming spectators of His magnificence. 17 For He got from God, the Father, the honor and glory (…) 18 (…) being together with Him in the holy mountain.

On the holy mountain Peter witnessed a preview of the (re)coming of Christ. How striking is it then that this incident took place “after six days” (Matt 17:1) which is on the seventh day, the Sabbath! The fact that Luke 9:28 says that it was about eight days after Jesus’  prophecy does not oppose this. On the contrary. Because if Jesus spoke these words on a Thursday than eight days later would have been a Sabbath, or the Seventh day.

The transfiguration on the mountain is in terms of both content and timing, a confirmation of the words of the prophets. Listen again to Peter’s comment:

19 And we are having the prophetic word more confirmed, which you, doing ideally, are heeding (as to a lamp appearing in a dingy place, TILL THE DAY SHOULD BE BREAKING…

The dawn of this (seventh) day is, what is called in Hebrews 4:9, the sabbatism or sabbatical rest that remains for the people of God. 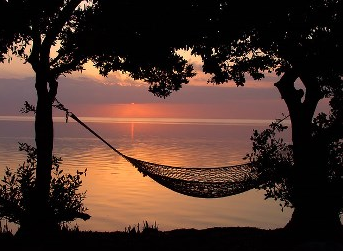