| Blog English | the decisions of the apostles' meeting

the decisions of the apostles' meeting 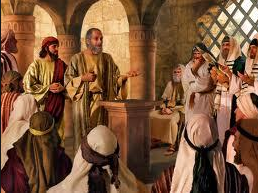 QUESTION: How should we understand the decisions of the meeting of the apostles in Jerusalem (Acts 15:20)? Are the nations, nevertheless, partially subject to the law of Moses? ANSWER: The reason for the meeting in Jerusalem was the question whether, and to what extent, the believers from the nations should adhere to the law of Moses (Acts 15:5). It was Peter who was the first one to make it clear that the yoke of the law was not to be laid on the nations (15:10). Then, Paul and Barnabas confirm this opinion with their accounts showing that God has certified their message among the nations (15:12). Lastly, it is James, who draws the inescapable conclusion that the nations should not be harassed and will only have to abstain from the ceremonial pollution of idols, from prostitution, from what is strangled and from blood (15:20). The meeting is in unanimous agreement, being sure of the guidance of the holy Spirit in this (15:15,28). The decisions are drawn up by letter (15:23, 30) and are with Paul and Barnabas, and others (15:25), sent to the regions of Syria and Cilicia, Antioch (15:23). With these written confirmations from Jerusalem, Paul travels through the cities and gives over to them the decisions that were taken in Jerusalem (16:4). So much for the history. Now the content of the decisions. According to Peter, taxing the nations with the yoke of Moses, would be nothing less than tempting God (15:10). It would therefore then be inconsistent to include, in the decisions, still a part of the law of Moses. That is not the case, either. The four things from which the nations should abstain, are not a partial enforcement of the law of Moses, but are matters which mankind, from the time of Adam, should have nothing to do with. Whoever worships the one, true God, admits by definition, no idolatry (1Thes.1:9). Prostitution (= intercourse with someone other than their own husband or wife; 1Cor.6:16) contradicts the sanctity of marriage that goes back to the days of Adam and Eve (Gen.2:24). And abstinence from things strangled and blood is based on the words of Genesis 9:4. Until the flood in Noah’s days, mankind was vegetarian. After this, meat is also added to the menu, with the restriction that blood (= the soul) is not to be consumed. That explains the mentioning in Acts 15:20 of the strangled, i.e., animals that are snared and from which the blood could not flow away. In other words, the four things from which the nations are to abstain are not based on the law of Moses, but go back to Noah and Adam. They are not Jewish, but universal decrees.