| Blog English | The apostles: who are they?

The apostles: who are they?


The Greek word ‘apostle’ means ‘representative’. The word is used 80 times in the New Testament and is primarily known as designation of the apostles of Jesus Christ. Jesus called his 12 disciples ‘apostles’ (Luke 6: 13). Later the circle of apostles is expanded significantly with another 72 other men who were dispatched by Jesus. (Luke 10: 1). That makes a total of 84 apostles (=7×12). Maybe Paul referred to this wider circle in 1 Corinthians 15, when he wrote about “the twelve”, but also about “all the apostles”.

Apparently also Barnabas, Paul’s co-worker, belonged to that wider circle of apostles. That is very possible, because he lived in Jerusalem (Acts 4: 36-37) and in any case he is called apostle together with Paul (Acts 14: 14). That also applies to Silas (or Silvanus), who was also from Jerusalem (Acts 15: 22) and also called apostle by Paul (compare with  1 Thessalonians 2: 6 and 1 Thessalonians 1: 1)

In any case “all the apostles” have directly been delegated by the risen Christ. The representation characterizes the true apostle of Christ.

Also Paul complies with that criterion. Surely, Jesus, his Lord, appeared to him, although he was the latest and in a unique manner.

Thereupon He was seen by James, thereafter by all the apostles. Yet, last of all, even as if a premature birth, He was seen by me also. For I am the least of the apostles, who am not competent to be called an apostle, because I persecute the ecclesia of God.
-1 Corinthians 15: 7-9-

Paul calls himself apostle, with shame, because he persecuted the ecclesia of God. Because of that heritage he can only call himself ‘the least of the apostles’. But nevertheless quite positive. Elsewhere he speaks of false apostles, fraudulent workers, being transfigured into apostles of Christ (2 Corinthians 11: 13), and Paul denounces them.

In a few cases we read about ‘representatives of ecclesias” (2 Corinthians 9: 8) or about Epaphroditis as apostle and minister for Paul’s need (Philippians 2: 25). That is a representation of a different nature, no representation of Christ. But when in the Evangels (Luke 24: 10) or Acts (1: 2; 6: 6) or in the letters (Galatians 1: 19, Judas 1: 17) is written about ‘the apostles’, it is always about those apostles who are delegated personally and directly by (the risen) Christ.

Christ is the Head of the ecclesia, the Body of Christ (Colossians 1: 18), because with him “the Firstborn from among the death”, the Body begins. But subsequently as the first, apostles were added. Paul writes to the Corinthians:

Now you are the body of Christ, and members  of a part, whom also God, indeed, placed in the ecclesia, first, apostles, second, prophets, third, teachers, thereupon powers, thereupon graces of healing, supports, pilotage, species of languages.
-1 Corinthians 12: 27, 28-

Consequently, the apostles had laid the foundation. That foundation is evidently Christ, because “no one can lay beside that which is laid” (1 Corinthians 3: 11). When Paul, also in the Ephesians letter, compares the ecclesia with a spiritual construction, he writes:

Consequently, then… you are being built on the foundation of the apostles and prophets, the capstone of the corner being Christ Jesus Himself
-Ephesians 2: 19, 20-

Where it applies to the foundation of this spiritual construction, Paul includes all who “were apostle before him’ (Galatians 1: 17).

To Paul was entrusted “the administration of the grace of God” for the nations (Ephesians 3: 2) and through him the secret is made known (Ephesians 3: 3) to the other apostles…

which, in other generations, is not made known to the sons of humanity as it was now revealed to His holy apostles…
-Ephesians 3: 5-

The apostles play a primary role in the construction of the ecclesia, the body of Christ:

The conclusion must be that to and through Paul “the secret of the Evangel” (Ephesians 6: 19; Romans 16: 25; Colossians 4:3) and the truth of “the ecclesia, the body of Christ (1 Corinthians 10: 17; Ephesians 1: 22, 23; Colossians 1: 18) was made known. But Paul never excludes the other apostles. On the contrary, he calls them at first, when it is about their place and function in the ecclesia, the body of Christ. 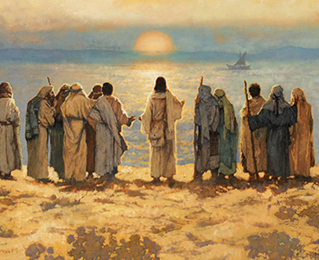