Son of God in power 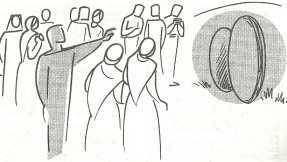 …concerning His Son (Who comes of the seed of David according to the flesh, Who is designated Son of God with power, according to the spirit of holiness, by the resurrection of the dead), Jesus Christ, our Lord… Rom.1:3-5 (Concordant Version))

Most translations render this sentence incorrectly. Usually, the translation is something like: “… declared to be the Son of God with power… by the resurrection from the dead.” (KJV). But Paul is not talking about Jesus’ own resurrection from the dead. He speaks of “the resurrection of the dead”. On his mother’s side, Jesus was from the seed of David (1:3). Due to His conception by holy spirit, He was the Son of God (Luke 1:35). The power of His descent was proven, when He caused the dead to rise. Several times, when Jesus came into contact with the dead, He raised them from the sleep of death. Think of the daughter of Jairus and the youth of Nain, as well as the story of Lazarus. Nor forget the opening of the graves of many, fallen-asleep saints, at the moment when Jesus died (Mat.27:51-54). The Roman centurion and others, who saw it, acknowledged it and said, being deeply impressed: “This truly was God’s Son.”

For even as the Father is rousing the dead and vivifying, thus the Son also is vivifying whom He will. John 5:21