| Blog English | "Snatched away to God and His Throne"

"Snatched away to God and His Throne" 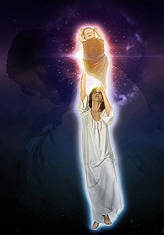 In the previous blog, I explained that the ecclesia, which is the body of Christ, is called to the throne. Not merely to the throne in Jerusalem, but to Above, to God and His Throne (Rev.12:5), in the Above. In Revelation 12:1-5, is given a description of a sign of a woman who brings forth a male son who will shepherd all nations. Because the dragon aims to devour both (the woman and the male son), the male son, as soon as it is born, will be snatched away to God and His throne. After this, the woman, for a stay of 1260 days, will flee to a for her reserved place in the wilderness. In a few strokes of the pen, is Israel being pictured (&gt;the woman) who brings forth the Messiah (&gt;the male son). Please note, as the woman represents a people, even so the male son represents a people. “The Christ” is not only denoting the head (which appears first in the birth process), but also the body, the ecclesia, belonging to the head. Immediately before the woman flees into the wilderness, the ecclesia shall be snatched away “to God and His throne” – promoted to the highest rank and station! Vacancy The snatching away of the male son before the great tribulation is not only happening due to the menacing, great danger at hand. It is also happening to immediately fill a vacancy. When the dragon (satan, the old serpent; Rev.12:9) with his followers shall be cast down to earth, their place in heaven becomes vacant. That is why Revelation 12 shows that the moment the male son is being snatched away to realms above, at the same time the diabolos and his train is being cast down to the earth. This constitutes a switching of the guard or of the authority, if you will. Where one is promoted to heaven, the other is, of necessity, degraded to earth. However, do not think that the male son (read: Christ and the ecclesia) consequently have nothing to do with the earth anymore. On the contrary! Concerning it, see my next entry. ——————————— first published (in Dutch): 2 september 2011 translation: Peter Feddema