For the scripture is saying to Pharaoh that “For this selfsame thing I rouse you up, so that I should be displaying in you My power, and so that My name should be published in the entire earth.”

Esau faces Jacob. And opposite Moses, to whom God made himself known as the merciful God (9:15), is Pharaoh. Paul quotes from Exodus 9:16 where God through Moses tells Pharaoh that He purposed through Pharaoh to demonstrate His power and so make His name known throughout the earth. God had already warned Moses beforehand that Pharaoh would not heed the call to “let my people go” (Ex. 3:19). And when at last Pharaoh succumbed to the pressure of the plagues, then GOD hardened his heart (Ex.9:13). Or as the Hebrew reads: GOD strengthened his heart.

Pharaoh’s recklessness was not a directing error. On the contrary, it was GOD’S purpose. That is why GOD strengthened Pharaoh’s heart when it threatened to fail. For to show his strength, GOD needed a ‘heavyweight’ as an opponent. Pharaoh’s firm ‘no’ was essential to the display of GOD’s saving power. Because of Pharaoh’s incredulous resistance, the miracle of Israel’s exodus would be talked about worldwide and thousands of years later. With GOD nothing ever goes wrong! 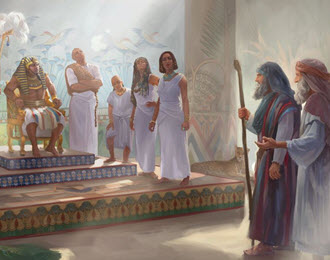