Now if we died together with Christ, we believe that we shall be living together with Him also, having perceived that Christ, being roused from among the dead, is no longer dying. Death is lording it over Him no longer.

The “if…” does not express uncertainty but supports the argumentation. Since we died together with Christ and are thus associated with him, we will logically also live with him in his resurrection. Paul does not speak of “will” because the resurrection life would still only be future for us (6: 4). With the future tense (“shall be living”) he takes us so to speak. to the starting point (death) to see from there what is to come.

That Christ who was roused from among the dead “is no longer dying” is knowledge. It is what we are supposed to know. His resurrection from the dead is a completely unique event, unlike anything that has happened before. The persons raised from the dead on previous occasions, such as e.g. the young man in Nain, the daughter of Jairus and Lazarus all died again later. Their resurrection was a return to the corruptible life. Christ’s resurrection is of a different order. He left death as a Firstfruits for good. 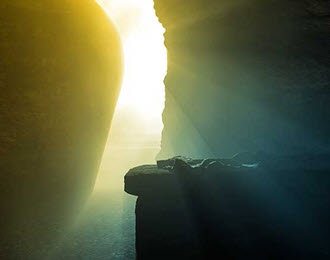