Nevertheless death reigns from Adam unto Moses, over those also who do not sin in the likeness of the transgression of Adam, who is a type of Him Who is about to be.

Paul had started in 5:12 with a comparison (“as by one man…”) but has not finished it so far. He won’t do that until verse 18. All previous verses are part of Paul’s lead-up to it. But the hint is already clear: Adam is compared to Christ.

Adam is a type of him who would come after him. The word ‘type’ is derived from the verb for ‘to hit’: for example, a metalworker punching a shape or mold. That shape serves as a template and shows the contours of what will be poured into that shape. Here Adam is called a type because in everything he refers to “Him Who is about to be”.

Also in 1 Corinthians 15, Paul extensively teaches that Adam was a first (15: 45.56). A stepping stone to. Adam was not the final version, but an introduction. The prelude that precedes the climax. In the creation of “the first man Adam”, GOD looked forward to “the last Adam”. Adam was the ‘caterpillar.’ And who would come after him, the ‘butterfly’! 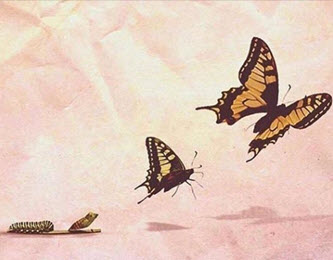