Therefore, even as through one man sin entered into the world, and through sin death and thus death passed through into all mankind on which all sinned…

Paul is clearly referring here to the history as described in Genesis 3. Certainly, it was Eve who took first (literally and figuratively) and was deceived. Yet by “one man” Paul does not refer to the woman but to the man, Adam (see verse 14). For God spoke to Adam about not eating “the tree of the knowledge of good and evil.” At a time when the woman was not even there yet (Gen.2: 16,17). Adam is considered representative of humanity. He was the first formed (1Tim.2: 13) and is also considered responsible for his wife as head.

Of course, sin was already present in the garden before the first human couple had eaten the forbidden fruit. After all, there was “the serpent” who with his questions made God suspect and sowed doubt about his words. But Paul is not talking about the role of “the serpent” here. The point is how sin entered the human world. And this “through one man”. Just as sin also finds its exit “through one man”. 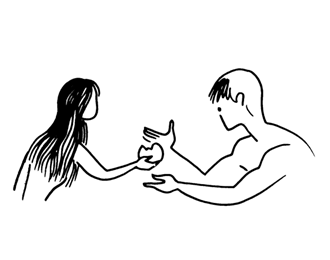