Verse 25 shows the contrast between the share of man on the one hand (“given up… offenses”) and the share of GOD on the other (“Roused… justifying”). This contrast is highlighted very often in the book of Acts. “… the Inaugurator of life you kill, Whom God rouses from among the dead …” (Acts 3:15; 4:10; 10:39,40). It is reminiscent of the foretelling words of Isaiah 53: 5. “… for our transgressions he was wounded …”. It were the transgressions of the people that condemned Jesus innocently to hand him over to death to the Romans.

People could kill Jesus but only GOD could then rouse him from among the dead. As the firstfruits. The reason for his resurrection is “our justification”. In the following chapters Paul will explain this in detail. As all mankind is condemned to be sinners and mortals because of Adam, so all mankind finds “justification of life” (5:18) in Christ. The Life that he brought to light in his resurrection, perfect and incorruptible, becomes the part of all people. That all mankind will be righteous is guaranteed in the resurrected Christ! 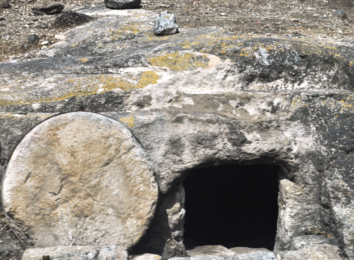