And not being infirm in faith, he considers his body, already deadened (being inherently somewhere about a hundred years) and the deadening of the matrix of Sarah…

At the age of 70, Abram was promised that his seed would be like the stars of heaven. When he was eighty-six years old, Ishmael was born to his slave Hagar (Gen. 16:16). Until the age of ninety-nine, Abram thought that Ishmael would be the son of the promise (Gen.17: 1,18). Until GOD, just in that year, assured him that the son of the promise would be born of Sarah. A rather bizarre idea, because by now Abraham was impotent and his wife, who was ten years younger, had always been barren (Gen.11: 30) and, moreover, she had long ceased to be “in the manner of women” (Gen. 18:11), that is, she no longer menstruated.

Abraham noticed all of this realistically. He was aware of his own incapacity as well as that of his wife. Both of them were “dead” in terms of reproductive power. But GOD promised life from the dead with the circumcision of his manhood as a sign. And although weak himself, Abraham experienced the resurrection power firsthand. And Sarah in her mother’s womb as well. 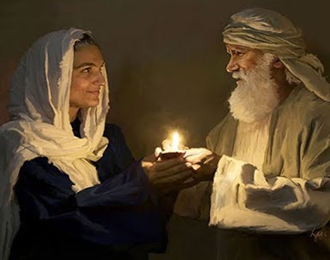