Romans 16:5 – The ecclesia at their house


And [Greet] the ecclesia at their house.

The word “ecclesia” is (from the word structure) an “out-calling” but has the meaning of a “people’s assembly” where the highest decisions are made. Think e.g. to the ecclesia as it is mentioned in Acts 19 (:32, 39, 41): it is the official assembly of the people. That is, all the people were counted there as present. The ‘New Testament’ therefore has no such thing as ’the local church’ as ​​opposed to ’the universal church’. The ecclesia that gathers in a particular place, by definition, represents the whole community. By calling a meeting at someone’s home an ‘ecclesia’, this meeting is assigned the highest possible status.

As far as we know anything about locations where ecclesias met, in the NT this is usually at someone’s home (Col.4:15; Movie.1:2). There were no church buildings, not to mention cathedrals. The idea of ​​an institution or membership is completely unknown in Scripture. The ecclesia is not an organization but an organism: the body of Christ. And that is the only way it functions: organically! 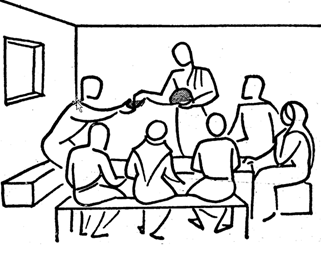