Greet Prisca and Aquila, my fellow workers in Christ Jesus.

After Phoebe’s recommendation follows a long list of greetings that Paul conveys to his readers. The first ones he names are Prisca (or Priscilla, as Lucas calls her) and Aquila. Paul got to know this Jewish couple in Corinth (Acts 18:2). They had recently fled Rome, and Paul moved in with them because Aquila, like himself, was working as a tentmaker. Remarkably, both Luke and Paul always mention Priscilla (or Prisca) first. As “co-workers in Christ Jesus,” Prisca’s part apparently comes to the fore.

When we reconstruct Prisca and Aquila’s lives, it is striking how eventful their lives have been: they have lived and worked in many places. They fled from Rome, settled in Corinth and when Paul left from there to Ephesus they traveled there with him (Acts 18:18) and played an important role there in the ‘update’ of the very gifted Apollos (Acts 18:18). 18:26). When Paul later writes a letter to the Corinthians from Ephesus, he also greets them on behalf of Prisca and Aquila and “the ecclesia at their house” (1 Cor.16:19). And now that they have returned to Rome, they again have an ecclesia at home (Rom.16:5). What a servitude and hospitality! 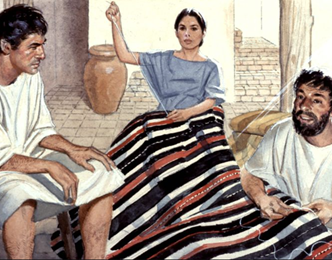