And again Isaiah is saying, there will be “the root of Jesse, And He Who is rising to be Chief of the nations: On Him will the nations rely.”

By “the root of Jesse” is meant a shoot (shoot) from the root. A shoot from the cut stump of Jesse, that is the father of David and therefore also the ancestor of the Davidic royal house. This dynasty produced 22 kings until the exile, after which the family tree of kings was cut down as it were.

But through Isaiah, God promises that from that severed stump one day a promising young shoot would grow. A descendant of David (1:4), yes, who would restore “the ruined hut” (= the royal house with a vacant throne; Acts 15:16). Not just to rule over Israel in Jerusalem but to be “the chief of the nations.” He is the “shoot” (Heb. netser > Nazareth! Mat.2:23) from a doomed stump. He is the Risen One, and in Him nations will place their hopes! 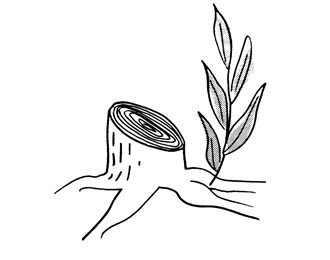