And David is saying, Let their table become a trap and a mesh and a snare and a repayment to them.

The next witness Paul presents from the Hebrew Bible is Psalm 69. David also writes about Israel’s blindness and unbelief. Psalm 69 is quoted no less than six times in the NT when it comes to the rejection of the Messiah. About how he is hated for no reason (69:5) and how the zeal for God’s house consumes him and about the reproach he bears (69:10). But also that they give him vinegar to drink in his thirst (69:22). It speaks prophetically of the Son of David (Acts 2:30,31) in whom all this has been fulfilled.

Paul’s quotes Psalm 69 here to describe the consequence of Israel’s rejection. “Their table” refers to the place where the people meet. “Table” can also refer specifically to the altar in the temple (Mal.1:8). But also more general for the place where the food is served. Referring in this context to the counterfeit word with which the people are “fed.” Israel’s table becomes a trap, a hunting net, a snare, and retribution. It speaks of the fatal darkness that came upon Israel as the Light disappeared. Until… 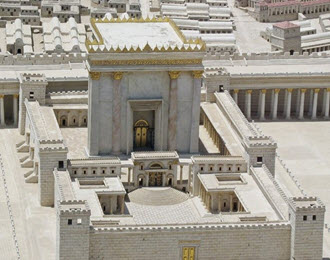