For God’s indignation is being revealed from heaven on (…) men who are retaining the truth in injustice, because that which is known of God is apparent among them, for God manifests it to them.

The indignation of GOD revealed from heaven appears in his aversion in the present day. Literally. He turns away, or as is often stated elsewhere: He hides his face. Where people suppress the truth, the light goes out.

The truth that Paul is talking about is “that which is known of GOD”. That will be explained in more detail in the next verse. The nations were not like Israel, in possession of “the Scriptures,” and therefore much of GOD was unknown to them (Ps. 147:20). And as long as they don’t hear the Evangel of the resurrected Christ, they can’t know it either.

“That which is known of GOD” is what mankind can know about Him from creation. It is true that He Himself is invisible, but no one should have missed the fact that he must be there. Every human, endowed with the ability to think logically, knows that behind an intelligent design is an intelligent designer. No watch without a watchmaker. No creation without Creator. 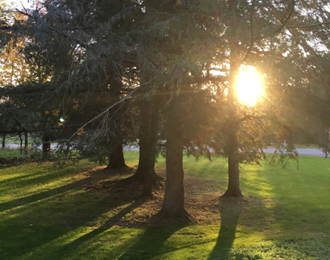