In April the movie ‘Come Sunday’ released on Netflix. It has been based on the true story of a Pentecostal preacher, Carlton Pearson, known in America. He was a rising star among the evangelists and he has led a mega-church in Oklahoma. His ministry was focussed on ‘saving souls’. The turning point came, when after he visited his beloved uncle in jail, he heard that this uncle had committed suicide. An unsaved soul, lost eternally… While he worried about this, also news reports of mass slaughter in Rwanda came to him as sledgehammer blows. Millions of people who had never heard about Jesus Christ. Would they all go to hell? Carlton couldn’t believe it.

Carlton expressed his doubts in the services. But in that way, he sawed off the branch on which his evangelical church was sitting. Leaders like the well-known Oral Roberts started to get involved. Carlton had to repent of his heresy. But instead of that, his doubt about the hell changed into the conviction that God will save all people. And he went started telling it on stage and mentioned numerous verses that always were ignored or reasoned away.

But no matter how convicting, it didn’t help. The orthodox leaders issued anathema to Charlton and his church got empty. Good friends avoided him as a dangerous deceiver. The popular leader, Charlton Pearson became an isolated outcast. But more than ever, he began to realize that the gospel is inclusive: embracing all people.

It’s remarkable that Netflix considered this story as a movie. In my opinion it succeeded in creating a convincing drama. Carlton is a sincere man with a beating heart for his God. But also, someone who has compassion with others. He also has the courage to think and to ask uncomfortable questions. The movie sharply shows how relentlessly the church deals with what it considers as heresy. Not based on arguments, but by mentioning the tradition which learnt it differently.

For me the movie was very recognizable. Partly because I have the same experiences myself. The personal drama that is shown by the movie, is inherent to the confrontation between the doctrine of hell and the Evangel. If the doctrine of hell is true, then God is infinitely worse than all Hitlers and Stalins together. It’s impossible to unite an endless damnation and God’s unconditional love.

I’m not enthusiastic about everything in this film. The arguments in the various doctrines failed. From both sides, by the way. I understand that a feature film is not the setting for a thorough discussion, but this could have been much sharper. The most elementary questions about eternity, hell and judgment weren’t even asked, let alone answered. This movie is more about emotion than what Bible teaches.

For me it’s disturbing that Pearson claims that all people should be saved. That is not what the Bible teaches. God is the Saviour of all people and that means that he saves all people. That’s something else that people are already saved. Anyway, those were some critical comments. But don’t let it stop you from looking at this intrusive movie.

Below the trailer of Come Sunday. 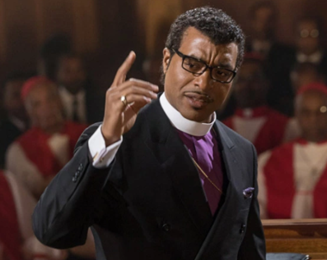