Revelation 5;6 – Standing as though slain


And I perceived in the center (…), a Lambkin standing as though slain…

John extensively described the throne of God, the four animals and the twenty-four elders. With all associated symbolism. Finally he arrives at the center of the heavenly spectacle.

Johannes does not see a lamb, but a lambkin. Can it be even more vulnerable? Yes, because the lamb he sees has been slain. Normally that would mean that the Lambkin would lie. But now comes the punch line: the slaughtered lamb he sees…. standing! Isn’t that amazing? It can only mean one thing: the lamb that has been slain has risen.

In a few words, this verse summarizes the basis of the Gospel. The slaughter did not end, but proved to be the prelude to a new beginning. Like a lamb or a kid goat was slaughtered and then placed on the altar, whereupon it rose up to a sweet fragrance for God. It is the same symbolism. The ascending sacrifice speaks of him rising from the grave. Moreover, by his resurrection, this slaughtered lamb became “the Lion of the tribe of Judah” (5: 5)! He is the Firstfruits, the first, the nr 1 the king. Now death no longer frightens us! 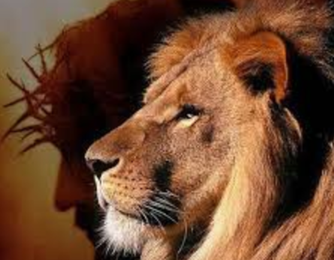