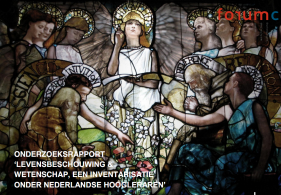 For you are observing your calling, brethren, that there are not many wise according to the flesh; not many powerful, not many noble, 1 Corinthians 1:26

The first chapters of 1Corinthians are not pleasant chapters for those who highly regard the “wisdom of the world” and value respect and prestige. The believers, to whom Paul was writing, were by and large not people of stature; neither in academic terms (“not many wise men”), nor politically (“not many mighty”), nor in social terms (“not many noble”). Corinth was a seaport and apparently it were the dock workers and manual laborers, rather than the ‘high society’, which knew themselves to be called by Paul’s Evangel. 44% atheist professors The above posted Scripture came to mind, when I heard this week of a report which showed that of the Dutch professors one quarter claimed to be agnostic and nearly one half to be atheists. The latter is an extremely high percentage when we compare this with 14% of the normal Dutch population. What’s the reason? The Bible says that God’s works “with the mind are seen” (Rom.1:20). Popularly said, anyone using his common (!) sense knows from creation that there is a Creator. Yet, this same Bible teaches that it is also “the wisdom of the world”, which leads away from God. The whole system of assumptions, reasoning and experimentation is, in advance, boarded-up shut for God. Science only reckons with what the senses present to us, and since (the unseen) God is outside of this definition, science does not discover Him. This result is already built into the basic premise. Scientific statements have, therefore, by definition, only (very) limited validity. But it often are scientists, more so than ordinary people, who do not accept this. Wherefore, Paul also writes that the world by its “wisdom” does not know God (1 Cor.1:21). Their ego has gone to their head. wise for the world but foolish for God – and vice versa God has pleasure in by-passing the wisdom of the world and, as it were, to pull a long nose at her, and to choose those, who in the eyes of the world, are foolish. Don’t get me wrong, scholars and even people with academic titles can certainly be saved, but that’s not because of, but in spite of their learning and titles. ——————————— translation: Peter Feddema