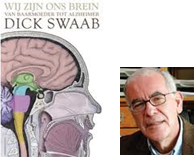 Swaab The weekend supplement of the Dutch newspaper, het Nederlands Dagblad, is this time dedicated to “free will”. This topic has become rather prominent in discussions, not in the least due to the bestseller, ‘wij zijn ons brein’ (we are our brains), by brain researcher, Professor Dick Swaab. The atheist Swaab argues that “free will” is an illusion. All of our choices, he claims, are the result of neurological processes in response to our environment. It is noteworthy, while Swaab is called a “neurocalvinist” (&gt; everything is already fixed in advance), the Calvinistic Dutch Newspaper, ND, has considerable difficulties with Swaab’s views on” free will”. Sculptures What is painfully lacking in the contribution of the ND was even a slight reference to the passage, par excellence, where this issue comes up: In Romans 9, Jacob and Esau are named in connection with God having made His choice of them, even before the two boys were born. And Pharaoh is introduced, who, although opposing GOD’S will, could do nothing but what God intended him to do. And Paul, himself, states the objection:

You will be protesting to me, then, “Why, then, is He still blaming? for who has withstood His intention?” Romans 9:19

This objection is still the # 1 argument against God’s absolute sovereignty and for the so-called free will. For how could a man be held responsible, if GOD directs everything (good as well as bad)? To which Paul’s answer is:

O man! who are you, to be sure, who are answering again to God? That which is molded will not protest to the molder, “Why do you make me thus?” Romans 9:21

Paul does not begin to write about ‘responsibility’ – that word is not even in the concordance of Scripture! He only counters that man, compared to God, is like clay compared to a potter. No one has created himself. And instead of arguing against this, it would be prudent to acknowledge our place in relation to God. Did Paul avoid dealing with the above mentioned question? On the contrary, for GOD’S remarks are part of the sculpting process. He also forms us through His critical comments about us. As the ‘Potter’, He presses His material, He pulls it and He cuts into it, in order to achieve the desired result. GOD’S disciplinary measures are not based on ‘free will’ or on our ‘responsibility’, but are an integral part of the fact that He, as the Potter, is working (with success) to form His creations. happy end Let’s just be glad that we, as people, are 100 percent GOD’S creations and that we have nothing of ourselves. That makes us really humble, but it is, at the same time, also our glory. GOD is the Creator, the Author and Director, and we cannot but play the role given us, in accord with His script. That is the only reason why a final, all-inclusive happy end is absolutely guaranteed! ——————————— translation: Peter Feddema