At Christmas we celebrate Jesus’ birthday. That is the usual explanation of Christmas, although the fact that it’s reasonably well-known that Jesus was very probably not born in a winter night. The circumstances Lucas describes around Jesus’ birth doesn’t give an indication of that. Think about the decision of Emperor August to registrate the entire civilized world. Or about the shepherds on the field, who watched over the flock in the night.

Both unlikely took place in wintertime. But when? If we cannot clearly point the season, it should be even more difficult to search for month, week or day. Or is there an answer?

when he came to be twelve years old

After Luke told what happened before and around the birth of Jesus, he continues with one single story of his youth; his first festival of the Passover in Jerusalem. This is what Luke describes in chapter 2:

If we take verse 42 literally, Luke informs us here about the moment that Jesus reaches the age of twelve. Not that he ‘was twelve’, the way it is rendered in many translations, but he reached the age of twelve just before he and his parents went to Jerusalem for the festival of the Passover. That means that Jesus’ birthday was just before Passover! Now we have a leeway of a few days to determine his birthday. Somewhere in the days that the travel to Jerusalem took place, Jesus reached the age of 12. This walk from Nazareth to Jerusalem (about 80 miles) took about four days. For the day of the Passover is 14 Nisan/Aviv, Joseph and Mary must have left the 9th or 10th of that month from Nazareth. Somewhere in the days between the 9th and 13th Nisan/Aviv, Jesus reached the age of 12 years old.

One day in that period, is from a  biblical point of view most interesting: 10 Nisan. That was the day the Israelites took a lamb in their house (Exodus 12: 3- 6), to slay it the 14th of that month. Is this 10th of Nisan not the perfect day for Jesus’ birthday? To be slayed later, on the 14th of that month? Because yes, that would be the day Jesus was crucified – “our Passover was sacrificed” (1 Corinthians 5: 7)!

Then it will rightly be a sign (Luke 2:12) that Jesus at his birth had been swaddled and laid in a manger! For, as from 10 Nisan the Israelites had a lamb in their house.

If this is the date (10 Nisan), we subsequently can precisely determine the day of Jesus’ circumcision. For his circumcision took place (according to the practice of the law) on the eighth day from his birth (Luke 2:21). When we reckon 10 Nisan as the day of his birth, then 17 Nisan is the eighth day. And that is precisely the day of the resurrection of Jesus Christ! He died on the 14th and three days later he raised from among the dead. So much can be told about that date, but I will not do that here. It’s enough for now to point out that the eighth day of Jesus’ circumcision is typologically fulfilled in his resurrection. The eight speaks of a new beginning (after the fullness of seven) and the sign of the circumcision speaks of the revelation of new life!

By an apparently lateral remark of Lucas (“when he came to be twelve years old”) the date of both Jesus’ birth and his circumcision come into a tremendous light. He was born on the day that Israel took a lamb in the house and circumcised on the same day he would once raise from among the dead forever! 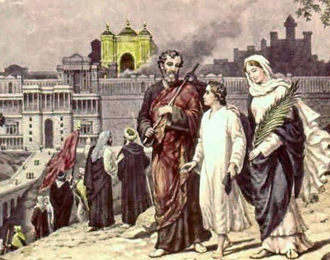