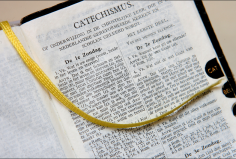 The Heidelberg Catechism states in Lord’s Day 7, the following question (20):

Are all people then saved through Christ, just as they were lost through Adam?

A very good question, to which the apostle Paul gives an explicit answer, more than once in his letters.

In telegram style (the italicized words are missing from the original text) and with an irrefutable logic, Paul, without detours, gives a distinct answer to the Catechism-question. One act of disobedience (eating the forbidden fruit) condemned all mankind, without exception, to death and sin. Please note, one act of righteousness (obedience unto the death of the cross) and no less than in the former case, all humanity will receive justification of life. Is the first declaration universal, then the second also. As Paul wrote earlier in Romans 3:

For ALL sinned and are wanting of the glory of God. Being justified GRATUITOUSLY in His grace, through the deliverance which is in Christ Jesus -Romans 3:23-24-

In the letter to the Corinthians, Paul is no less clear:

Christ, as the Firstfruit, is vivified (in glory and immortality). He is the guarantee that all mankind will follow him in this. Yet, each in his own order. The answer to question 20 of the Heidelberg Catechism could merely refer to the above Scriptures. Astounding as it may sound, the answer of the Catechism does not even mention the two texts. And what is even worse: instead of a loud and affirmative YES, the Catechism answers with a definite NO:

NO, only those are saved who through true faith are grafted into Christ and accept all his benefits.

That this is in contradiction with what Paul brings forward, seems like a euphemism. But what are we to make of the basis of salvation? The Catechism states that they only receive salvation who have a “true faith” “and accept all his benefits”. And that is true. Salvation is only for those who confess Jesus as Lord, from their heart. But does Scripture not teach that all will do so? God has vowed to Himself that to Him every knee will bow (Isaiah 45:23) and every tongue will confess (not: every lip!) (ex-omelogeo = from the inside) to the glory of God the Father, that Jesus is Lord (Phil.2:10,11)! Would GOD, Who opens the hearts, be unable to bring this about? If He could bring Saul of Tarsus, the foremost of sinners, to his knees in one moment, would He not be able to this for all the people? Do the authors of the Heidelberg Catechism, after all, not believe in God’s “irresistible grace”? And that salvation and faith is a gift of God (Ephesians 2:8)? There remains yet one thing and that is to check the sixteen Scriptures that the Heidelberg Catechism puts forward in defense of her answer. They are:

Matthew 7:14 Because strait is the gate, and narrow is the way, which leadeth unto life, and few there be that find it. Matthew 22:14 For many are called, but few are chosen. Psalm 2:12 Kiss the Son, lest he be angry, and ye perish from the way, when his wrath is kindled but a little. Blessed are all they that put their trust in him. Mark 16:16 He that believeth and is baptized shall be saved; but he that believeth not shall be damned. John 1:12 But as many as received him, to them gave he power to become the sons of God, even to them that believe on his name: John 3:16 For God so loved the world, that he gave his only begotten Son, that whosoever believeth in him should not perish, but have everlasting life. John 3:18 He that believeth on him is not condemned: but he that believeth not is condemned already, because he hath not believed in the name of the only begotten Son of God. John 3:36 He that believeth on the Son hath everlasting life: and he that believeth not the Son shall not see life; but the wrath of God abideth on him. Romans 3:22 Even the righteousness of God which is by faith of Jesus Christ unto all and upon all them that believe: for there is no difference: Romans 11:20 Well; because of unbelief they were broken off, and thou standest by faith. Be not highminded, but fear: Hebrews 4:2 For unto us was the gospel preached, as well as unto them: but the word preached did not profit them, not being mixed with faith in them that heard it. Hebrews 4:3 For we which have believed do enter into rest, as he said, As I have sworn in my wrath, if they shall enter into my rest: although the works were finished from the foundation of the world. Hebrews 5:9 And being made perfect, he became the author of eternal salvation unto all them that obey him; Hebrews 10:39 But we are not of them who draw back unto perdition; but of them that believe to the saving of the soul. Hebrews 11:6 But without faith it is impossible to please him: for he that cometh to God must believe that he is, and that he is a rewarder of them that diligently seek him.

Without exception, the Catechism refers to Scriptures which seem to point out that many, due to unbelief, will be lost and will not receive everlasting life. Evidently, it does this with the thought that this is in conflict with the fact that, eventually, everybody will be justified, be vivified and be saved. This they did because they have no idea of God’s “purpose of the ages” (Ephesians 3:11) and do not know the Scriptural meaning of the Greek words “aion” (eon) and “aionios” (eonian). The word “aion” they have rendered eternal. A fatal error! It is believed that the return of Christ will introduce “the endless eternity,” instead of “the oncoming ages” (eons), in which Christ will reign. Many will have no part in these eons and be lost; dead, either for the first or for the second time (the “second death”). Is that hopeless? Certainly not, because in Scripture, the lost will always be found again. And death, as the last enemy, will be abolished (as we saw earlier) since all who are dying in Adam, will be made alive in Christ. Every tongue shall glorify God with jubilation! And the Son will, eventually, hand over to His God and Father a perfected Kingdom, in order “that God may be all in all” (1Cor.15:22-28)! God’s indignation is a reality. But never forget the Biblical proportions. “A moment lasts his anger, but a lifetime His mercy” (Ps.30:5). God’s anger is not in conflict with His love, but is a result of it. As for a surgeon painful procedures are unavoidable, in view of the well being of the patient, even so God punishes always with a view to correction. Judgment is: straightening out things that are crooked and readjusting what is not right; because God will never forsake the works of His hands!