| Blog English | Does Paul find a response in Rome?

Does Paul find a response in Rome? 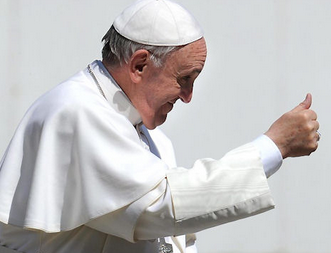 Briefly it appeared as if GoedBericht.nl received support from none other than the Pope. A day after the appearance of “101 bombs and grenades“ the Pope in Rome, during a speech, declared:

The Lord has redeemed all of us with the blood of Christ: all, not just Catholics. Everyone! (…) Even the atheists. Everyone!

That sounds good! Great even! But alas … if we just continue reading about what the Pope has said, it becomes evident that he meant something else. With redemption he means: the possibility of becoming saved by means of good works. Regardless of whether one is a Muslim or atheist. His message was:

Do good, then we will meet each other (in heaven).

The Pope shows to have a broad vision. He really thinks catholic, which means, in general. Also people with a different religion or belief than Roman Catholic, even atheists, he pulls inside the circle… PROVIDED they do what is good. And so it is, once again, a matter of works and not of grace (Rom.11:6). As if Christ died for good people. No, Paul writes, He died for the ungodly. Not for the righteous, but for sinners (Rom.5:6-8). Without ifs and buts. This is the message that Paul ever addressed to Rome. The blood of Christ does not merely make salvation possible – it really saves. Even the greatest of sinners (1 Timothy 1.1:15)!