Jesus hears that they cast him out, and finding him…

John 9 tells extensively of the healing of the man born blind. An unmistakable sign, because everyone around this man knew his background. That makes the Pharisees’ response to his healing all the more obscure. Because Jesus had done this ‘work’ on the Sabbath, they did not want to see this miracle. Who was actually blind?

The man who received his sight back, had been expelled from the synagogue by the Pharisees. As we read it so often in the Scriptures. No place for enlightened eyes in the religious ‘establishment’. When God opens windows and perspectives, human doors close. Both go hand in hand.

When Jesus learned that the healed man had been thrown out, he sought him out and found him. That is also characteristic of “outside the camp”. There you get to know Christ. So far the man knew little more than that he was blind but could now see. But that was just the beginning. Beyond ‘the system’ while reproach may be yours, it is also where the Lord makes Himself known and has so much more to show! 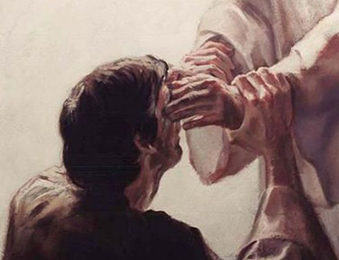