| Blog English | John 8:6 – And wrote down something with a finger

John 8:6 – And wrote down something with a finger


Now Jesus, stooping down, and wrote down something with a finger in the earth.

An adulterous woman was brought to Jesus by scribes who asked him a trick question. According to the law of Moses, this woman should be stoned, did Jesus think so too? It was a trick question. Jesus does not answer but stoops and writes with his finger in the earth on the floor of the temple. What he wrote is not mentioned. Two verses later we read again that Jesus wrote in the earth and then acquitted the woman. What does it mean to write twice with your finger?

The first writing with the finger is a model for the old covenant that brought condemnation and death. The second letter is a model for the new covenant. Israel as an “adulterous woman” will be acquitted and will no longer sin. Because then the law will be written in her heart. 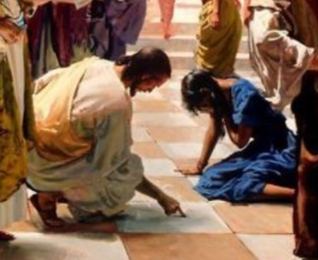