Now as they are filled, He is saying to His disciples, “Gather the superfluous fragments, lest some should perish.” They gathered them, then, and cram twelve panniers with fragments of the five cakes of barley bread…

The well-known history of the feeding of the five thousand is a beautiful picture of the present. It is described after Jesus’ rejection in Jerusalem (John 5). It takes place by the sea, which is an image of the nations. Jesus is on the mountain, a type of his exaltation. At that place he abundantly feeds all who are with him and listen to his word. Is that not exactly what Christ is doing today?

The barley bread is related to the resurrection of Christ that took place on the day the first sheaf of the barley harvest was offered by the priest. It is not for nothing that Jesus calls himself “the living bread”!

The feeding on the mountain by the sea thus refers to the present time. But there is more, there is a lot left! It contains a promise for the future. The twelve baskets speak of that. Twelve naturally refers to the twelve tribes, the people of Israel. They too will soon be fed with “the bread of life.” Plentiful! 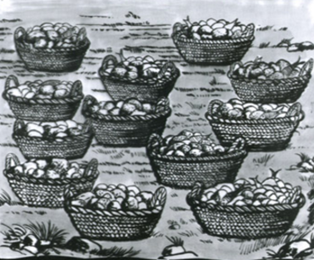