03-09-2019 - Posted by Andre Piet
Summary of a study held on 2 October 2011 in Zoetermeer. The central objective is the typological and prophetical meaning of a miraculous and mostly misunderstood history.

Once Jacob came abroad, because of “own work”. God had given his promise to Jacob, but Jacob meant that God needed some help. Very religious indeed, but the Scripture calls it “unbelief”.
Romans 9: 11, 32

In the first fourteen years that Jacob stayed in his house, his uncle Laban noticed that Jacob’s presence had done him no harm. God blessed Jacob, wherever he went. And Laban was benefiting. Laban’s flocks had become bigger and bigger and there was only healthy offspring. This has a remarkable parallel with the Jewish people, which abided twenty centuries in the diaspora. Where they were accepted to stay, it gave always prosperity and welfare.
Genesis 30: 27-30; Genesis 31: 31-38

Altogether twenty years Jacob abided abroad with his uncle Laban. Divided in two times seven years in which he worked for gaining his both wives (Lea and Rachel) and the remaining six years in which he gained his own flock to take with him back home.
Genesis 31: 34, 38

Jacob’s stay abroad is a type of the present time in which “the house of Jacob” is abiding abroad. According to the Scripture, they are there because of unbelief. Not twenty years, but twenty centuries. Hosea speaks of “two days”, which refers to two millennia. Also displayed in the arch (> Christ) which went through Jordan (> death and resurrection) and is followed by the people of Israel at the distance of “about two thousand cubits”…
Hosea 6: 1-3; 2 Peter 3: 8; Joshua 3: 4

The gaining of Jacob’s flog, which he would take with him to the promised land is a type of the gathering of the people of Israel, that will return to Israel.
Micah 2: 12

Jacob doesn’t want to receive a present from Laban. “Not shall you give me anything!”, he says to Laban. His following proposal shows that he expects all blessings from above. For speaking humanly his proposal to Laban was extremely stupid. What Jacob does to gain his flock is not cunning, but an expression of belief!
Genesis 30: 31

Jacob will work for Laban for the next few years and agrees with his wage. First, all (small) animals that are not smooth white (striped, speckled and flecked) are taken apart from the white animals. Those isolated animals would be placed in the care of the sons of Laban, three day’s journeys away from Jacob. So that both flocks couldn’t mix. Then Jacob would pasture the smooth white flock of Laban.

By the way, Laban’s name has also the meaning of ‘white’. And all the animals that would be born striped, speckled or flecked in this smooth white flock, those would be Jacob’s wage. Indeed, Jacob’s flock consists of (seen from the outside) “black sheep” and flecked en striped animals…
Genesis 30: 33-36

The chance that a smooth white flock will bring forth colorful, brown animals, seems incredibly small. Studying inheritance isn’t necessary to conclude that. But the fact that Jacob agrees to this wage, means that he expects it from his GOD. If GOD wants him to be rich, then he will be rich. Therefore he doesn’t need Laban or who else. “he blessing of Yahweh, it |enriches, And He shall not add grief to it”, Proverbs 10: 22 says.

Jacob calls the wage he will receive from Laban “my righteousness”. This time he doesn’t receive it from own cleverness or work, but it’s because of looking above. Like his grandfather, Abram once looked above and said ‘amen!’ to GOD’s unconditional promise. And that’s what GOD reckons for righteousness.
Genesis 30: 33; Genesis 15: 6

When Jacob pastures the smooth white flock of Laban, he collects fresh rods (sticks and branches) of poplars, hazels and plane trees, he takes the skin away and bares the white of the branches. What Jacob does is not magic, but a depiction of circumcision: he takes ‘rods’ (traditionally another word for the male sex organ) and takes the skin away. I.e. he takes the ‘foreskin’ to bare the white. White is a depiction of perfection and thus also of the new creation.
Genesis 30: 37

After circumcising the rods, he put them next to the drinking troughs. And guess what: the flock became rutted, started mating and, after a while, gave birth to striped, speckled and flecked offspring! Those colorful and brown animals were Jacob’s wages. And he put it apart from the smooth white flock of Laban.
Genesis 30: 38-40

The meaning of this history is not a lesson genetics. It is typology and prophecy! The flock of Jacob, what he will take with him to the promised land, speaks of the people of Israel that will be gathered to return to “the land”. The heart of the people will be circumcised on that occasion. They will drink GOD’s word, but “the cover” (the skin, the foreskin) will be taken away. Life and fertility will be the result!
Deuteronomy 30: 1-10 (especially verse 6!); 2 Corinthians 3: 13-16

Jacob puts the circumcised rods at the drinking troughs, only when the strong (literally: stringy) animals were mating. The first fruits. The flock of Jacob is a flock of firstfruits. Destined to go in front, strongly!
Exodus 19: 5,6 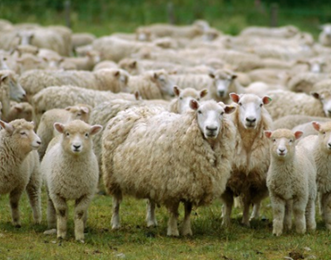