It is He Who is bringing chancellors to nothing; Judges of the earth He makes to be like chaos.

Isaiah 40 sings of the transcendent glory of the Creator of heaven and earth. Nations are considered as a drop from a bucket and as a speck of dust on a balance (40:15). Their rulers also never become more than they are: dust, taken from the ground and returned to the ground.

The rulers of the earth can only rule because GOD allows them that place. As long as it takes. Above all, they shouldn’t imagine themselves to be anything. In the above verse it is said that GOD makes the rulers “like chaos.” Isn’t that also a striking description of current world politics? So much manipulation, deception and fraud, which then results in conflict, war and chaos.

As much as the rulers on earth are anxious to bend everything to their will and create order in the world, they will not succeed. This eon is not designed for that. Hence, GOD “makes rulers like chaos”. The more lofty the ideology, the greater the disillusionment. Peace and justice will be established in the coming aeon. Not by human hands, but by that one Man who GOD himself appointed for this purpose. 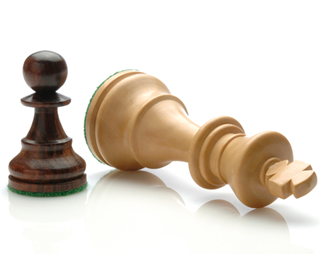